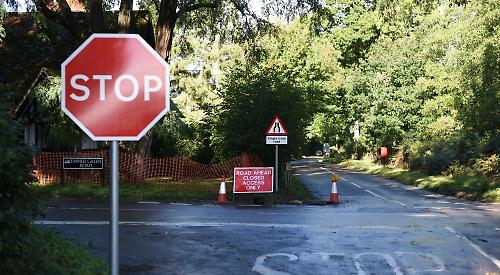 NEW safety features are being installed at an accident blackspot.

The work taking place at the Coppid Crossroads near Binfield Heath follows a series of crashes.

There have been at least three incidents this year at the junction of Emmer Green Road, Sonning Common Road and Harpsden Road and there was a fatal accident there previously.

Oxfordshire County Council, the highways authority, is carrying out the work following a campaign by Councillor David Bartholomew, whose ward includes the village, and the parish council. The safety features include an entrance gateway and additional “Stop” signs with a fluorescent border.

“Dragon’s teeth” markings on the road, which give the impression that it is narrowing, are to be created and the existing road markings will be repainted.

These were due to be completed this week but the heavy rain at the weekend has meant a short delay.

Councillor Bartholomew said: “This has been an accident blackspot for years and some years ago someone was killed.

“After that, there was significant enhancement of the ‘Stop’ signs and things did calm down for a while but over the course of the last 12 months, the accidents have just kept coming.

“About a year ago I had the location assessed. It was checked for safety, the signs were cleaned and the lines were refreshed.

“There was no obvious reason for the accidents, so it was given a clean bill of health but the accidents have kept happening and something has got to be done.”

He said the current work was a “belt and braces approach”, adding: “There are no obvious further measures that we could take, so let’s hope this stops the accidents.”

In February, a Hyundai Tuscon and an MG3 were both badly damaged after colliding with the brick wall at the nearby Chapel Cottage.

In May, a Toyota car and a BT Openreach van collided at the crossroads. Both vehicles left the road and smashed the same garden wall.

On September 28 — the day that the work started — there was another collision involving two cars at the crossroads.