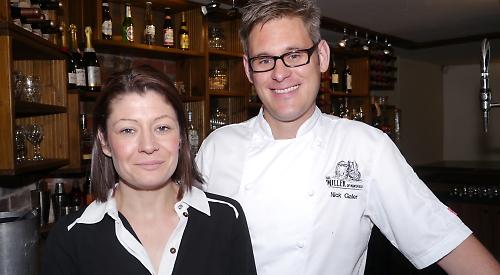 THE owners of a restaurant and hotel in Goring have thanked firefighters for saving their livelihood following a blaze.

Four fire crews went to the Miller of Mansfield in High Street after being called out soon after 7.45am on Sunday.

They were on the scene within five minutes and told the owners that the building would have burned down if they had been any longer.

In any case, the business will be closed for several weeks while the damage is repaired.

It is run by Nick and Mary Galer, who took it over in 2014 and reversed its ailing fortunes.

The fire broke out inside a tumble dryer kept in an outhouse behind the main building. It had been used to dry tea towels but is not thought to have been in use at the time.

Mrs Galer had noticed a faint burning smell and checked the machine but found nothing wrong.

But later a colleague noticed the fire and was shouting out a warning when the fire alarm went off.

The staff called 999 then evacuated about 16 guests to Rectory Garden on the other side of the street and swept the premises to ensure no one else was inside.

Mrs Galer said: “When I came down that morning, I smelled what I assumed was burnt oil from making Yorkshire puddings. Someone told me it was the tumble dryer so I looked inside but there was no fire, just the tea towels.

“Soon after the alarm went off and the fire was as high as our roof — it was awful.

“I had visions of the electrics exploding and everything going up in smoke.”

The fire crews, including one from the village fire station in Icknield Road, extinguished the blaze within minutes but stayed on site until about noon in case it restarted.

They pumped out the kitchen, which was flooded with water from their hoses. The fire destroyed a boiler supplying the premises so it no longer has hot water or central heating.

A fire door leading to the kitchen was badly scorched and must be replaced but the crews said this prevented more serious damage.

Several windows were shattered by the heat and some laundry was damaged by smoke.

Staff living on site have either moved to a neighbouring chalet or are living with friends or family.

The Galers have hired a security firm to deter intruders while the restaurant is lying empty and they wait for their insurers to assess the damage.

The couple say they have been bombarded with messages of support on social media.

Mrs Galer said: “The crews were amazing and we can’t thank them enough. They said if it had been another five minutes, it could have gone to the roof and then the whole building would have started to come down.

“Some of our customers had run a 100-mile challenge the day before and were hobbling out. We couldn’t give anyone breakfast but thankfully Pierrepont’s café gave us bacon rolls free of charge.

“We’ve got no idea how long we’ll be shut but we haven’t been able to keep up with the sheer volume of supportive calls and messages.

“Once we’ve got a timeframe we’ll be letting customers know if their booking is affected.

“The news of the fire quickly spread online so we posted to let everyone know we were okay. One person joked that we’d burned the toast — if only that was all we’d done!

“It’s tough because we’ve already lost Sunday’s takings and times haven’t been great for hospitality because of covid-19 but we’re going to do everything we can to fight back.

“We’ve had offers of food, cups of tea and spare beds, which is really touching. Even when people don’t have anything practical to offer, it’s helpful just to know that they’re thinking about you.

“This is the kind of village where people come together when you need help and we couldn’t ask for a nicer place to live.”