Kenton Theatre not to re-open until next year 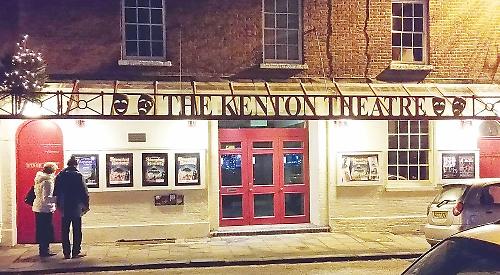 THE Kenton Theatre in Henley will not re-open until next year due to the coronavirus pandemic.

The trustees of the New Street venue made the decision on Monday following the announcement of the four-week lockdown this month with the possibility that it could be extended.

It means that any lingering hopes of a Christmas pantomime this year are now crushed.

All theatres, museums and galleries, together with other non-essential businesses, must close during the latest lockdown, which began yesterday (Thursday) and will remain in place until December 2.

The Kenton trustees had already agreed that it would not be financially viable to re-open the theatre, which has been closed since the first lockdown began in March, after a covid-19 assessment concluded that only 66 seats out of 240 in the auditorium could be used to allow for social distancing.

The theatre will continue to produce digital content for people to watch online.

Julie Huntington, who chairs the trustees, said: “We’re not disheartened. We are full of excitement and are powering through. We have a lot more digital content in place. We have a great team and we’re not going to let anything faze us.”

The Mill at Sonning was only open for two days before closing again.

It re-opened its 215-seat auditorium on Friday with only 66 seats to allow for social distancing.

After two performances that night and the following evening, it shut once more.

Managing director Sally Hughes said: “Everyone was working so hard to get it to open on Friday night.

“People who were furloughed were coming back but we had to call them to let them all know they couldn’t return yet.

“I did go to bed with a really heavy heart and I woke up early on Sunday to let everyone know the plans — we just have to keep going.

“People do want go out and be entertained so we are hoping there will be a huge bounce back after this lockdown. We have to take responsibility for it and we can’t blame anybody.”

The theatre has moved all its November shows to January and February, while the December shows remain on the same dates at least for now.

“We’ve been calling customers all week and changing their booking dates,” said Mrs Hughes. “We are all working to a plan and the customers are being amazing.”

The Mill has received no grants or funding from the Government during the pandemic.

Mrs Hughes said she applied for money from the culture recovery fund but Arts Council England said the theatre was not “diverse enough”.

“We took it quite personally as I thought it was a good application,” she said.

“We hire 90 local people and more than 230 artists over the course of a year.

“So there is no grant but we do have the furlough scheme and we have some money that we saved up.

“We are still accepting donations so if anyone wants a chair dedicated to them, we still have some left.”

The River & Rowing Museum in Mill Meadows, Henley, has had to close before its new exhibition, Elmer and Friends by David McKee opened.

Director Sarah Posey, said: “Obviously we support the actions of the Government but we are sad to be closing as we’ve just had a fantastic half-term with lots of visitors and family workshops. It has been great to welcome people back.”

The museum is due to
re-open on December 10.

“Of course the further lockdown will have a big impact on our finicial situation as we are a charity so we rely on the income of visitors,” said Dr Posey.

The Old Fire Station Gallery in Market Place, Henley, was forced to close just before a new exhibition called About Time.

A spokeswoman for Henley Town Council, which owns the venue, said: “We will continue to liaise with artists to reschedule their exhibitions.  We look forward to being able to open safely again when restrictions are lifted.”