Now villagers can have say on housing drainage plan 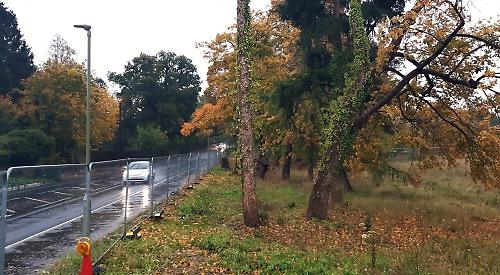 RESIDENTS of Shiplake will be able to have their say on a housing development which they fear will put their homes at risk of flooding.

Taylor Wimpey has agreed to conduct a risk assessment on its drainage proposal for Regency Place, formerly Thames Farm, in Reading Road, which opponents claim would increase the problem elsewhere in the village.

The developer wants to channel surface water from the 95-home estate through a new pipeline beneath Lower Shiplake and into Lash Brook at the southern outskirts. It says the water would flow into the River Thames,

Villagers were angry that, under law, they did not have to be consulted on the proposal. Residents of Mill Road, which is next to the brook, says it is prone to severe flooding as it is partly-blocked. In 2014, they had to evacuate their homes due to flooding following heavy rainfall.

South Oxfordshire District Council was set to decide whether to approve the company’s plans two weeks ago.

But following pressure from objectors, it agreed to postpone a decision and instead asked the developer to carry out a flood risk assessment within 60 days.

Taylor Wimpey has agreed and now the public will have at least a fortnight to comment.

The firm conducted a flood assessment as part of its original planning application in 2016. It proposed to disperse surface water deeper underground but changed tack when it discovered “voids” in the chalk bedrock which could become sink holes. Now these will be reinforced by injecting them with a grout-like substance.

The developer’s drainage consultant says the pipeline would be unlikely to increase flooding.

A Taylor Wimpey spokeswoman said: “Following conversations with the district council, we confirm we will carry out further works to provide an addendum to the original flood risk assessment, based on the current proposal.

“Once this has been submitted to the appropriate consultees, we will be in a position to decide the drainage strategy.”

A district council spokeswoman said: “We delayed the decision on this application so that Taylor Wimpey has the time to provide us with a flood risk assessment.

“This will help us to make a well-informed and robust decision on its proposal.”

The Environment Agency said that although Lash Brook has a higher flood risk than Thames Farm, the pipeline would be only a “minor” development.

It could take two years to lay the pipeline and the new new houses could not be occupied before then.

The developer is working with Thames Water, which would take over a new pumping station in one corner.

Plans to build at Thames Farm were refused by the district council in 2016 but landowner Claire Engbers later won a planning appeal in the High Court.