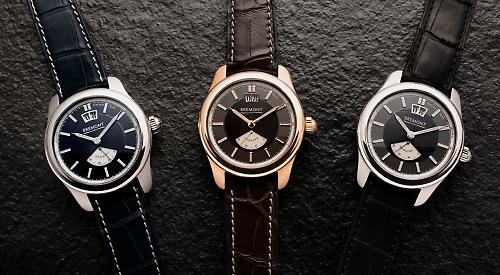 A LUXURY watchmaker in Henley has released a new collection to commemorate the life of physicist Professor Stephen Hawking.

Bremont, which is based off Marlow Road, has been working with family of Prof Hawking, who died in 2018 aged 76, to create the Bremont Hawking Limited Edition Collection.

Nick English, who co-founded the company with his brother Giles, said: “Professor Stephen Hawking was arguably one of the most pre-eminent scientists of the last hundred years. We wanted to celebrate this incredible man’s life and his fascinating relationship with time.

“Hawking’s pioneering approach to popular science, alongside his tremendous curiosity and courage, make him a fondly remembered British icon.”

Giles English added: “The Hawking Collection is a slight divergence from some of the historic limited editions we’ve become known for at Bremont.

“Other than celebrating a true British legend, the story has added personal significance for myself and Nick with our father having been very aware of Stephen Hawking after they’d been to St Albans School together, a couple of years apart, and followed the same path to Cambridge University.

“As with each of Bremont’s historic limited editions there is also a philanthropic dimension. It’s been a real honour working closely with the Hawking family on this project who founded the ‘Stephen Hawking Foundation’ which facilitates cosmological research as well as support for those who live with motor neurone disease; part of the proceeds from these watches will be going directly to the charity.”

The Bremont Hawking Limited Edition, featuring a retrograde seconds hand and grand date, contains four wooden discs inlaid into the back taken from the desk at which Hawking contemplated the mysteries of the universe.

It also contains some meteorite to symbolise the cosmos which can be seen at the centre of the hand-finished closed case back, as well as an etching of stars from the night sky in Oxford, on January 8 1942, the date that Hawking was born.

The watch’s serial number is printed on paper from original copies of a 1979 seminal research paper commonly referred to as “The nuts and bolts of gravity”, co-written with one of Prof Hawking’s longest serving collaborators, Professor Gary Gibbons.

Only 388 stainless steel and black dial, 88 rose gold with black dial and 88 white gold and blue dial pieces will be made - the numbers referencing the year in which Hawking’s “Brief History of Time” was published.

To complement the men’s Hawking model, Bremont is also introducing a limited run of women’s watches as part of the collection.

Limited to 88 pieces, it will be available in stainless steel with a matte polished bracelet. Unlike the men’s edition, it features a dial entirely made from meteorite with polished nickel hands.

Turning the watch over reveals its open case back through which a hand-finished ‘black-hole’ automatic rotor can be seen. The rotor is inspired by the swirling of a black hole, a nod to the black hole theory so prevalent in Hawking’s scientific theories. It also incorporates a veneer of the oak from Hawking’s desk. Diamonds are inset into the bezel.

Prof Hawking’s son Tim said: “The wood sample in the timepiece originates from an oak, William & Mary slope-front bureau desk drawer thought to date back to the early 18th century. My father's paternal grandmother received it as a gift upon her retirement as headmistress from a school she had founded for girls in Boroughbridge, Yorkshire. It was given to my father in 1975 upon his return to the UK after his year's visiting fellowship to Caltech, Pasadena, and would remain with him until his death in 2018.

“My father’s work was primarily theoretical. Nevertheless, he was a person who placed great value on precision craftsmanship and the interplay of design and technology. This antique desk was a most treasured possession, representing both his grandmother’s pioneering commitment to education, and a portal back to happy childhood memories. The Hawking family are delighted that its legacy may live on further now in the Hawking Bremont timepieces.”

The company is set to open its new base off Reading Road, near Sheephouse Farm, early next year.