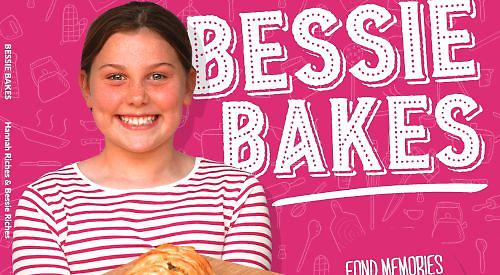 WHEN the first coronavirus lockdown happened, it was hard for Bessie Riches and her father having to stay at home all the time.

The 11-year-old was missing her friends at school while dad Neil was struggling as he suffers from early onset dementia.

They would “clash” with each other at home in Caversham, where they live with mum Hannah and Bessie’s sister Milly, 12.

Then they tried baking together and enjoyed it so much that Bessie is about to publish a cook book to raise money for Dementia UK.

Bessie, a pupil at Thameside Primary School in Caversham, said: “I baked lots and lots, probably a couple of times a week and I just loved doing it — practice makes perfect.

“I’ll be really excited to hold the book in my hands.”

Back in March it was especially difficult for Bessie and Milly having to cope with home-schooling and helping their mum care for their dad, a former Met police constable who had to take early retirement after more than 25 years following his diagnosis in 2015.

Mr Riches, 56, missed socialising with others with the condition at his Younger People with Dementia workshops, which help sufferers by providing activities to help with cognitive stimulation.

It was the family’s specialist dementia nurse, Lizzie Harrison, who recommended trying baking.

Mrs Riches, 47, a former sergeant in the Met, recalled: “When lockdown happened it was really tough for Neil and Bessie is a really sociable kid so she was finding it quite hard as well.

“It got really tough and they were clashing with each other and dealing with the ‘new normal’.

“I rang our specialist nurse and said I didn’t know what to do and she suggested doing some cooking. They made cookies one afternoon and it was the first time they had a positive time together during lockdown and it was a light- bulb moment.

“Bessie then emailed family and friends and asked for their special recipes that she could make.

“She’s quite into TikTok so she was cooking and filming herself and Neil joined in and it built up from there.”

The idea for the book came when Bessie asked friends and family members for their special recipes.

Mrs Riches said: “We have a friend who works in publishing and she had given us her recipe and said, ‘So what are you going to do with it?’

“She suggested we could turn all the recipes into a book and we were like, ‘Well, why not?’ and it grew from there.

“We did a photoshoot for a few of the bakes and I’m very lucky that I have a very talented photographer friend and another talented friend who is a graphic designer and did the front cover of the book for us. Bessie had a few things that she wrote as well as her top tips for cooking and I helped with the rest.

“As I was writing, I was thinking how we couldn’t have done it without friends and family support.”

Bessie’s parents, who have been married for 13 years after meeting in the police force, are proud of their daughter.

Mr Riches said: “I think it is fantastic. I couldn’t cook like that at her age. The cooking has helped me, yes. Bessie can understand me and we have a good time doing it.”

His wife said: “Neil used to love cooking when the kids were little. He loved cooking the roast dinners.

“Cooking was one of the first things that went really as you don’t usually think about it but it’s about following recipes and using the right ingredients and having it in the right order, so it was quite hard for him. He struggles to make a cup of tea now.

“But he realises that he used to love doing it and it’s that part of him he has now passed on to Bessie.”

Mr Riches was diagnosed after he and his wife started to notice he was losing his memory.

“It got worse and it impacted his job as a police officer,” said Mrs Riches, who spent 16 years with the police and then ran her own craft store in Reading before giving up to care for her husband.

“I was running a business and we were just rushing around. Neil was getting more stressed at work so we went to the GP and he was referred to the memory clinic for a test.

“It became apparent how bad his memory was and his cognitive abilities as well.

“The psychiatrist asked if we accepted the diagnosis and I was like, ‘Why wouldn’t we?’ It’s nothing to be ashamed of and we wouldn’t shy away from it.

“We explained it to the girls’ school and that way we had help and support as opposed to if we hadn’t accepted the diagnosis and kept it to ourselves. That’s the thing with Alzheimer’s — more often than not the person with the diagnosis doesn’t accept it so I was lucky that Neil realised.

“It made it feel a bit like we were in this together.”

Bessie and Milly have raised money about £700 for Dementia UK previously and their mother said that helped them to feel proactive.

Hilda Hayo, chief executive of Dementia UK, said: “We continue to be in awe of our fundraisers like Hannah and Bessie who, even in the face of adversity, are raising funds and awareness for dementia specialist support with creativity and passion.”

Bessie Bakes, which is published by Kingshill Books, will be available from November 30 from Amazon and Book Depository.

There will be a special launch at the Caversham Artisan and Farmers’ Market on Sunday, December 6.