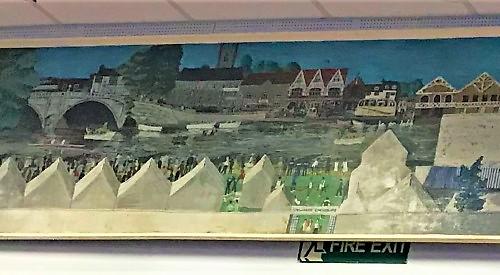 AN historic painting which depicts crowds enjoying the old funfair at Henley Royal Regatta could go on public display.

Judith Phelan has asked The Henley College, where she used to teach, to donate the 40-year old artwork to a venue which can exhibit it.

This could be either the River & Rowing Museum in Mill Meadows, which has galleries dedicated to the River Thames, rowing and Henley’s history, or the royal regatta headquarters by Henley Bridge.

The 24ft by 2ft canvas currently hangs above a door inside Rotherfield Hall, which is now part of the college’s Rotherfield campus off Paradise Road.

It was created in May 1963 by identical twins Catherine and Sarah Paul, who were a couple of years older than Mrs Phelan and first attended the college in 1956. It shows crowds of people watching the rowing races on the river, a ferris wheel, a swing ride, the boat tents and the Grade I listed bridge.

Mrs Phelan, 72, of Deanfield Road, Henley, is worried the painting is starting to split and someone may throw it away, although the college has promised that won’t happen.

She said: “It was painted in two sections and the joint between the middle is slacking a bit. At the moment it’s just sitting there with zero interest from anyone. My main concern is that someone will go in to change the electrics one day and the painting will be taken down and thrown away.”

Mrs Phelan was a student at the college from 1959 to 1963 and remembers when the picture was first displayed.

Later, she taught in the the physics department for eight years. She then became a part-time exam invigilator and, while supervising students, would spend a lot of time admiring the painting.

Mrs Phelan said: “When I first saw it, it reminded me what the funfair looked like during that time. It was always part of the regatta when I was little.

“Our school would give us the day off to go to the fair every year — we’d take a picnic and my sister and I would play around. As I got older I would go there in the evening with my friends so it’s a big historical memory.”

The regatta scrapped the funfair on Lion Meadow in the mid-Sixties because it needed the space for car parking.

Mrs Phelan said: “The twins probably painted it for fun. No one knows where they are these days but we’ve stuck something on Facebook and had lots of comments saying they were very talented.

“Because I spent a lot of time in the physics department while they were in the art department, the people I’ve kept in touch with won’t be the same as their old friends.”

A college spokeswoman said it would gladly discuss donating the painting. She said: “It’s very much loved by students and staff and we have no intention of throwing it away.”