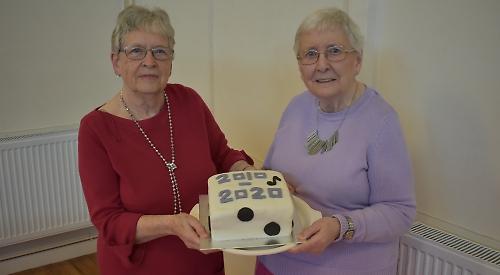 A SINGING group in Sonning Common has been disbanded due to the coronavirus pandemic.

Nottakwire had been going for more than 10 years and had raised tens of thousands of pounds for charities and local good causes with its public performances.

But group founders Margaret Moola and Elaine Williams decided to stop due to the threat of covid-19 to the 78 members, many of whom are elderly.

The group had not met since before the first lockdown when the Government banned communnal singing to help prevent the spread of the disease.

Mrs Moola, 77, said: “It had become evident that in the foreseeable future there was no possibility of a large group, such as Nottakwire, being able to sing together in the usual venue, Sonning Common village hall.

“Therefore, we were forced to make the decision that it was no longer viable to run the village community choir that we started, established, directed and organised for the past 10 years.

“We felt strongly that it was unkind and unfair to keep our 78 members hanging on in the hope that sometime soon they would be able to meet again. It seems highly unlikely in current circumstances that our members, who are mostly elderly, would feel comfortable meeting as we did before.

“Therefore, realistically, we also anticipated a drop in membership as a result of people’s health concerns.

“This factor alone would change the group dynamic to the extent that we would not be in a position to merely just ‘pick up’ from where we were when suddenly forced to stop in early March.

“By the time there is any chance for a group of this kind to return, Elaine, our conductor, will be 89 years old and I will be 78.

“Both of us, and a number of our members and assistants, have dedicated 10 years of our lives to Nottakwire.

“The intervening months with all they have brought have impacted on us all to the extent that we no longer have the physical, mental and emotional stamina to operate at the level we deem necessary to run the group successfully and with the energy required.”

Since it began in 2010, Nottakwire has raised more than £23,500 with two annual concerts and members’ donations. The beneficiaries have included the Fish volunteer centre in Kennylands Road, the Sonning Common Lunch Club, the skate park initiative, youth club Club SC, Sonning Common Rainbows, the Village Gardeners and Sonning Common magazine.

In 2014, the group won the Oxfordshire Youth Community Partnership Award, which recognises organisations that support local youth clubs. In 2016, the group sang for residents of the Thamesfield retirement village in Wargrave Road, Henley.

In May 2018, the group organised a charity recital with professional guitarist David Jaggs in aid of Sue Ryder, which raised £1,800. Later in the year, Nottakwire doubled that money with its two charity concerts.

The group marked its 10th anniversary in March with what turned out to be its final gathering. About 60 members gathered at the village hall in Wood Lane.

Carole Lewis, a parish councillor and an original member of Nottakwire, said: “I attended the first session in 2010. I think they were expecting half a dozen people and were overwhelmed with the number of people who showed up. I think there was up to 20 of us and I’ve been going every Friday since then.

“I love music but I always knew I couldn’t sing — that was before Nottakwire. Elaine Williams said that everyone could sing.

“I was taught to sing by Elaine and Margaret and it was wonderful being able to sing with the lovely people of the village.

“We will miss it, the singing and the meeting up with everyone. Everybody knows everybody, it was a very social group.”

Mrs Moola and Mrs Williams, who live together in Sonning Common, said it took a lot of “soul-searching” to reach their decision, but not all hope was lost.

Mrs Moola said: “We felt obliged to ‘come clean’ and inform the membership of our decision.

“Our aim and hope is that we will be able, perhaps at some point next year, to pick up the reins again with our much smaller Notts Group of singers.

“Whether and when that will be possible seems at this moment in time to be in the lap of the gods.”