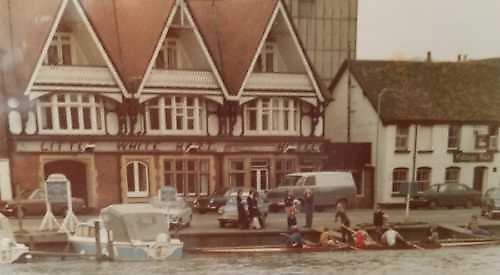 A PAINTING of a long-lost Henley pub has brought back fond memories for Steve Ludlow.

The 64-year-old, who still lives around the corner from the former Little White Hart in Thames Side, was one of the town’s youngest ever licensees when he took charge at the age of 22.

Steve served for two years and made friends with members of Henley Rowing Club, which was then based next door in what is now the Spice Merchant restaurant.

His husband Geoffrey Taylor, with whom he shares a flat in Station Road, recently bought him a framed print of the artwork by Camilla Dowse, who has a studio in nearby Singers Lane. The artist delivered it personally.

Steve says it reminds him of when the town had many more pubs and the police were far less strict on issues such as unauthorised lock-ins.

He grew up in Henley with his parents Derek and Ann and worked in several pubs before moving to the Little White Hart in 1976, aged 20.

He was soon helping with the day-to-day running and a year later he became assistant manager at the White Hart Hotel in Nettlebed. Both were owned by Tabard Inns, an offshoot of Brakspear, which emulated the Berni Inn steakhouses of the same era.

When Beatrice Pearce, manager at the Little White Hart, retired a year later, Steve offered to take her place. He was appointed
co-licensee with Chris Deegan, Tabard Inns’ director, and Tony Fincham, landlord of the former Old White Hart in Hart Street.  He lived upstairs in a flat overlooking the River Thames.

“I was simply in the right place at the right time,” says Steve. “They desperately needed someone and I was available and had done the job before I was allowed the licence because I had a co-licensee to fall back on but I doubt that would happen now. I had a great time. Back then everything was more local, both the landlords and the customers, and there were 30 or 40 pubs but many have disappeared.

“People used to go for a drink in each one and regulars kept their own glasses behind the bar. You’d notice someone come in and grab it off the hook for them.

“The rowers were always around
— I remember they carried boats to the water by standing in the road to stop traffic, which would give health and safety types a heart attack.

“Life definitely felt more relaxed. I had a birthday party, maybe my 23rd, where the rowers stayed until about 2am then decided to strip off, jump in the river and swim over to Leander. The police showed up but they just warned everyone to be careful then popped in for a drink.”

Another time, a drunken guest arriving by car ploughed through a road sign at the slipway at the bottom of New Street and almost plunged into the river. The driver then pulled into the pub’s garage and went to bed, hiding the damaged sign in the car.

Steve recalls: “The police asked me the next morning what had happened and I said I didn’t know, which was true — I had no idea that the evidence and the culprit were in my pub. The police didn’t take those things as seriously but I’m glad that’s changed.”

He left to run a café in Surrey and returned to Henley in the early Nineties. He then met Geoffrey and the pair became civil partners before marrying when the law changed in 2015.

The pub was bought by Brian Fitzpatrick who ran it for many years until its closure and conversion to flats in 2003.

Steve adds: “The painting is absolutely lovely and I’m delighted to have it hanging at home.

“It was obviously painted after the closure but I still remember which window was my flat. Camilla did a cracking job.”