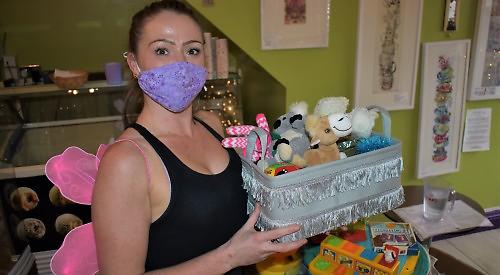 TWO cafés are collecting second-hand goods to give to children at Christmas.

The Chocolate Café in Thames Side, Henley, and its sister branch in Goring high street are accepting contributions until Monday.

Donations will go to the Cowshed at Hurst, a Christian charity which supports families in Berkshire who are experiencing hardship.

So far, the Henley café has received about four large bags' worth of books, toys, arts and crafts materials and board games.

The Inspiration gift shop in Goring is encouraging customers to buy one of its toys and donate it to the appeal. Vivienne Lee, who owns both cafés, said: “I was very aware that, because of the coronavirus pandemic, a lot of families that don’t usually require help at Christmas would be asking for it.

“I found out about the Cowshed while browsing Facebook and thought it was just the kind of cause we wanted to support.”

Katrina Trafford, who works at the Henley café, said: “People have been really generous so far and a lot of customers have come back just to donate goods.”

The café is also donating its used crisp packets to a project in Yateley which turns them into survival blankets for homeless people.