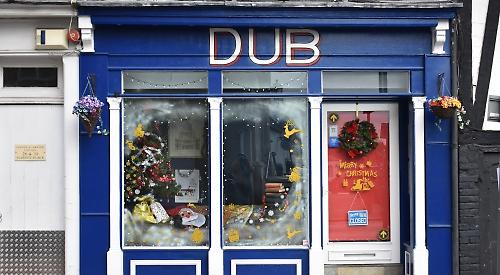 THE owner of a new Henley restaurant says the coronavirus almost drove him out of business.

Mathew Brumwell suffered a series of setbacks before and after he opened The Dub, an American-style diner with a British twist, in July when the first lockdown ended.

And when the second lockdown happened in November, he considered closing the business in Market Place, which replaced Mezo, a Mediterranean restaurant.

Instead, he persevered with the help of friends and family who invested in his venture and says trade has been “non-stop” since he was able to re-open when the second lockdown ended last week.

Mr Brumwell, 41, from Winnersh, had spent about 18 months looking for a suitable location when he signed the lease on the building in February.

He had intended to open the restaurant at Easter, serving burgers, hot dogs, chicken wings, steak and ribs.

However, he was unable to complete the refurbishment in time due to a lack of supplies and available workers caused by the pandemic.

He also struggled because the basement kitchen needed deep cleaning and had to remove a barbecue pit which had been installed by a previous occupant as it wasn’t meant to go in an enclosed space. A number of items including a bed also had to be removed from a cold storage unit.

Despite this, Mr Brumwell opened as a takeaway in June and when the lockdown ended on July 4, he opened the indoor seating area.

However, the former kitchen porter and chef was then hit by a number of new problems.

In August his extractor fan burned out so the kitchen was unusable for two weeks. He believes it was damaged by the previous use of the barbecue pit.

Mr Brumwell said: “Once the fan went, we had to stop serving food and apologise to customers.

“Temperatures in the kitchen would have gone through the roof with all the fryers going and staff safety was the highest priority. I wasn’t going to risk their health for the sake of a few burgers.”

He also fell behind on his records so scored a food hygiene rating of two stars or “improvement needed” when South Oxfordshire District Council’s environmental health team inspected the premises in September.

Finally, the second lockdown was announced and he had to close the restaurant as he couldn’t afford to have sold only takeaways.

He couldn’t furlough his staff as the business was too new to qualify for the government scheme so he had to make them redundant.

He also couldn’t get a business loan as his financial prospects were too uncertain.

However, family and friends offered him a lifeline and he was able to rehire his old team.

“The past few months have been interesting,” said Mr Brumwell. “Everybody in hospitality has felt it, from kebab shops to high-end restaurants.

“The second lockdown didn’t help anyone but being unable to access the furlough scheme only added to my headache.

“We were just bouncing back when we were told we’d have to close again. I thought, ‘you’re kidding me’ when the Prime Minister announced it.

“I already had loads on my plate and you start wondering what’s going to come next.

“I had opened by paying friends and family in burgers but by November they’d gone back to their jobs and I had staff on proper wages.

“All my plans went out of the window and I didn’t know where anything was going. I seriously considered giving up but I wanted to recover what I’d already invested and wasn’t sure what else I’d do.

“My friends and family have no idea about the industry but they’ve invested in me personally, which is nice, although now there’s a lot of pressure on me not to let them down. I’m completely committed to this.

“It has been an incredibly challenging year but, without being blasé, it gives you the confidence that you can handle things. You focus more on solving problems than worrying about them.”

The Dub — a cross between “diner” and “pub” — is due to have another inspection by the environmental health team and Mr Brumwell is confident of scoring more highly.

He added: “Things look pretty promising as long as we’re sensible and don’t end up in tier 3, which would be a problem as we’d only be allowed to do takeaways again.

“It will take a while before things go back to normal and it isn’t as fun to eat out with all these rules but we’ll give the best service we can and make people feel looked after.”

• The Mezo restaurant closed in August last year after just over a year of trading. Last month, director Tahsin Kan was ordered to pay more than £22,000 for breaking food hygiene and health and safety laws after being prosecuted by the district council.