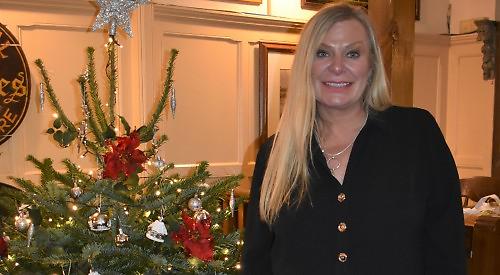 IF you recognise Dawn Mileham’s face, don’t be too surprised.

The new landlady of the Argyll pub in Henley is a former extra in EastEnders and has a relative who is a film star.

Dawn, 40, took over from Neil Ainsworth last week after the Market Place pub was sold by Greene King to Big Smoke Brewing.

She has a lot of experience in hospitality, having run pubs, restaurants and cafés across the South.

But when she isn’t serving customers, she is right at home singing, dancing and acting.

She spent four years entertaining passengers on cruise ships travelling the world and later had some walk-on roles in the BBC soap.

Dawn says being in Albert Square allowed her to realise a childhood ambition.

She explains: “ I’m quite impulsive and I just woke up one morning and thought, ‘I want to be in EastEnders’. My family would say I have always been a bit of a drama queen. I contacted a local agency and told them that’s what I wanted to do and six weeks later I was on it.”

Dawn would be required up to three times a week for filming.

She says: “I absolutely loved being part of it and I have some great memories of the people I met.

“I was in it when crazy Stella was abusing Ben Mitchell.

“On my first day of filming, I met the actress who plays Shirley Carter [Linda Henry] and we went for a smoke together. She is really nice.

“I also got to meet Barbara Windsor and she was lovely.

“There would be times when we were filming in the Queen Vic and you would get into long conversations with the other extras about what you did at the weekend and you forgot where you were.

“There was one scene in the café where I was asked to eat the same cooked breakfast four times because they kept doing the same take over and over again.

“Every single time I went there I was just so in awe of where I was and was so excited to be a part of it. I grew up with the programme and have admired it for a long time.”

Dawn only decided to stop because she wanted to spend more time with her 17-year-old daughter and 15-year-old son.

She believes she first caught the acting bug when she visited a holiday camp on the south coast as a teenager.

When she was 18 she went to work at a holiday camp as a children’s entertainer for a summer season.

Dawn later went travelling and was in Australia when she decided that she wanted to perforn on cruise ships.

“It was amazing,” she says. “We did the States, Hawaii, Fiji and Bermuda and I remember seeing Mardi Gras in New Orleans.

“I loved it — I was getting paid to travel the world and someone cooked and cleaned for you.

“It was very rare that you got a day off, though.” Dawn worked as a singer and dancer with Royal Caribbean and Thomson for four years before deciding to return to hospitality.

Before coming to Henley, she ran a pub in Middlesex for a year and prior to that she ran another pub in Southend for four years.

She had spent another 15 years working with different breweries in St Albans, Wembley and Sutton
as well as running a nightclub in Kingston.

Dawn already feels at home at the Argyll, where she is living as well as working.

She says: “It has been crazy but in a good way. All of the customers have been absolutely wonderful.

“We have had some excellent feedback about the staff and the changes to the menu.”

So who is the actor in the other actor in her family?

Her second cousin once removed is Hollywood star Jason Statham.

“I grew up with him and my mum used to cut his hair when he was little,” says Dawn. “Obviously I don’t see any of him now.”