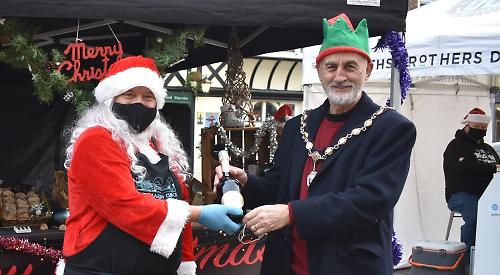 AWARDS were presented to the best-dressed trader and stall at Henley farmers’ market on Saturday.

Mayor Ken Arlett gave a bottle of Mr Hobbs gin to Tracy Betteridge, of Chiltern Lamb, who was dressed as a snowman wrapped in fairy lights.

James Hill, of the Marlow Cheese Co, received a bottle of fizz for his stall, which was covered in tinsel. The Mayor gave a special award of a bottle of red wine he had donated to Jo Eddon, of Honeys of Henley, who was dressed as an elf.

The town council was honouring the efforts of traders during a difficult year for them because of the coronavirus pandemic.

Miss Betteridge, who keeps about 280 lambing ewes at Medmenham, said: “I was the one who asked the guys at the market to get involved and jazz up their stalls so I felt I had to make the biggest effort.”

Mr Hill said: “We always dress the stall for the Christmas markets. I just wanted to make people happy as it has been a hard year for everybody.”

Mrs Eddon said: “It’s nice to know people recognise our efforts as traders.” Town and community manager Helen Barnett added: “We wanted to recognise the stallholders because they have come out in all weathers to support the town and they are a lovely bunch.”