Family feel the benefits of their greener lifestyle 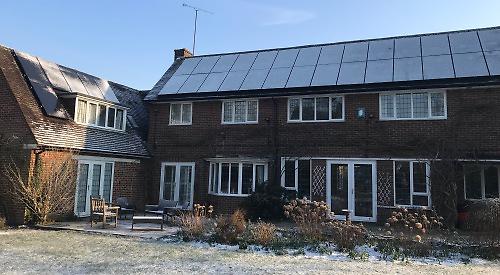 WE are all being encouraged to think about our impact on the planet and go “greener” by making changes to our lifestyle. One family in Sonning is doing more than most, as chief reporter DAVID WHITE reports.

WHEN the Jeffery family installed solar panels in their home three years ago, it cost them more than £20,000.

But by the end of 2022 they will not only have saved that amount in their energy costs but can look forward to making money by selling their spare electricity.

Toby and Rose Jeffrey and their three children live in a six-bedroom detached house in Sonning.

Their annual electricity bill used to be £1,500 but now it is down to about £50 after they decided to invest in a “green” energy system.

This comprises the 34 solar panels on the roof and the electricity storage system which allows them to power their home and charge two electric cars as well as being paid for the electricity they export to the national grid.

The system and installation cost £21,000, including a £6,000 Tesla Powerwall, a battery storage device.

Mrs Jeffrey, 46, says she would encourage other people to follow her family’s example, pointing out that while the initial investment may be off-putting, the long-term cost savings and environmental advantages far outweigh that.

She says: “Obviously, £21,000 is a lot of money and we do have 34 solar panels on our roof and I imagine not everyone would have a system that big, but by the end of 2022 essentially it is paid for.

“Our driving factor wasn’t just the financial, it was about future proofing as well.

“We love it and in terms of the electricity supply to our house it’s seamless. We used to have quite a large electricity bill because it’s a big house but this would benefit a small house as well.

“We’re not eco-warriors but we want to do our part and our children are keen on us doing it too.”

The family had wanted to reduce their carbon footprint when they lived in Charvil but their home there was not suitable for a solar installation, although they did have an electric car.

After moving to Pound Lane in 2017 they had the solar panels installed within three months.

“We had always wanted to do it and then we moved here,” says Mrs Jeffrey. “The roof was big enough and pointed in the right direction.

“We thought it would help with not only powering the house and doing our bit for the environment but we could use it to charge the EV.”

Now the couple own two electric cars, a Tesla Model 3 and a BMW i3. The family can fully charge the former, which has a range of 320 miles, for just £6, and the BMW for £3.

Mrs Jeffrey, whose husband runs an events business, says: “We’re very aware because of the news about the environment and fossil fuels and I guess it’s that family dream to be self-sufficient.

“In term of the cars, it’s a bit of a mindset shift. I wouldn’t go back to fossil fuel power. The EVs are fun to drive and really easy to use.

“We also look at things like recycling and reducing packaging.

“We’re never going to be completely self-sufficient but, actually, it’s a great investment to make and it’s looking ahead. We’re playing our little part in the environmental strategy.”

The family produce more energy from their solar panels than they can use. Once the system has powered the house and the cars, the excess is stored in the Powerwall.

Mrs Jeffrey says: “We can store electricity to use later in the day and in the evenings. It helps you by being more self-sufficient and less reliant on the grid.”

The Powerwall will then export energy to the grid. Under their current Octopus Energy Tesla Tariff, the Jeffreys have given Tesla the ability to access their Powerwall and use the solar-generated electricity they have stored if there is a shortage on the grid. The couple switched to the tariff a year ago, having previously used the Economy 7 energy tariff under which customers pay cheaper rates for seven hours during the night.

This used to mean the family had to plan and set timers to charge their cars overnight, for example, in order to maximise the savings.

Mrs Jeffrey says: “We have a busy household with three children and I didn’t always have the headspace to plan to maximise the tariff.

“For example, remembering to set a delay timer on the dishwasher so it ran during the Economy 7 hours, or trying to get the housework done during sunshine hours.

“Economy 7 did work for us but it took a bit of planning and if you forget you suddenly think, ‘I’ve got to get out of bed and plug the car in’.”

On the new tariff the cost is 8p per kilowatt hour all day.

“I can also tumble dry clothes knowing that the electricity used has been generated through the solar panels on the roof.

“The Tesla tariff is simple, easy and, importantly, saves us a lot of money. We don’t have to think about maximising the solar-generated electricity or worry about peak time use.

“In the early days we used to get quite obsessed by looking at how much electricity we were generating and how much we were exporting. That was a bit of a novelty.

“I would say to everyonethat if you can consider it, do because it has been really easy and there are some great tariffs out there.

“It feels good and we’re always looking out for other technology we can look to put in the house. We have considered a ground source heat pump.”