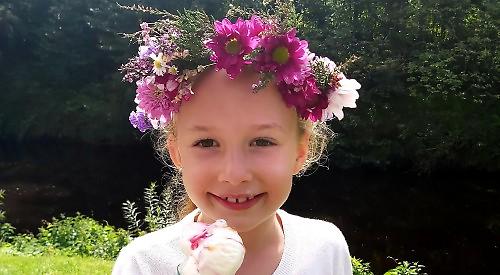 A WEST End star from Shiplake has released a charity single in honour of a little girl with a rare illness.

Mike Sterling was touched by the story of Evie Hodgson, from Whitby in North Yorkshire, who was diagnosed with severe aplastic anaemia in May.

The condition, where the bone marrow does not produce enough new blood cells, affects about 30 to 40 children every year.

Evie, eight, needs to have a bone marrow transplant and a donor who is a near perfect match has come forward so she can have the operation next year.

She is currently undergoing weekly blood and platelet transfusions.

Mr Sterling, 50, who played the phantom in The Phantom of the Opera on stage in London more than 1,000 times, has produced his own version of Mariah Carey’s Hero, which was released on iTunes today (Friday).

The proceeds will be split between the Anthony Nolan Trust, the Aplastic Anaemia Trust and DKMS.

Mr Sterling first learned about Evie from a friend, Steve Pritchet, and was unable to focus on anything else afterwards. He said: “I went out for a meal with some friends because we were between the two lockdowns and I just couldn’t relax. I couldn’t get the thought of this little girl struggling out of my head.

“It must be so horrible for an eight-year-old girl to go through this. Being a dad and grandad myself, I couldn’t bear the thought of it.”

He initially recorded a video message for Evie but felt he wanted to do more so went back to Mr Pritchet with the idea of a song.

“When I heard Hero, something just clicked — it was perfect,” he said. Mr Sterling got in touch with musical director Duncan Waugh, who assembled a track for the cover song in two days. They then spent an afternoon recording the song at Albourne Studios in Berkhamsted.

Mr Sterling said: “The first couple of times, I started to break down. I did it four or five times and I would get halfway through and get very emotional.

“It was probably the most cathartic experience I have ever had with a song. Normally, you try to think of a distant memory when you are trying to connect with a song like that but this is happening right now.

“I played it to Steve over Zoom and I couldn’t believe how amazing it was. It was such a beautiful arrangement by Duncan.

“We decided to not produce physical CDs but just offer a digital download. Not only was time against us but there was the cost, money which could be put to the cause. If this single makes the top spot, then the awareness alone would be incredible.”

Mr Sterling, who moved to Shiplake earlier this year, having lived in Henley for 14 months, is very proud to have been a part of Evie’s fundraising appeal.

This included video messages from celebrities including Dame Judi Dench, Brian May and Pixie Lott.

Although Evie now has a donor, Mr Sterling hopes her story will inspire others to join the donor register.

He said: “I am over the moon that this little girl is going to be all right. She has a big process ahead of her.

“In terms of being part of this campaign, it is such a special feeling and it comes close to when my children were born.

“I have done some big roles that I am very proud of and they were all lovely but none of those opening nights come close to this.

“People are literally the walking cure — it is quite magical really.”

Hero by Mike Sterling is available from iTunes for 99p.