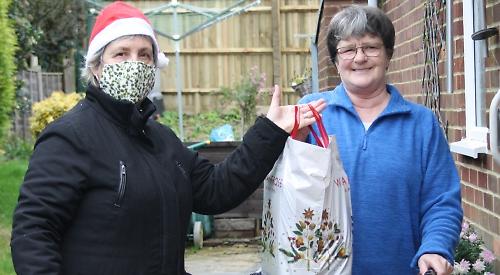 TWO women from Nettlebed gave out 60 goody bags to elderly villagers after their usual Christmas party was cancelled because of the coronavirus pandemic.

Claire Harwood and Susan Byers had raised £1,300 to pay for the bags of festive food and treats by selling more than 300 home-made face masks.

Mrs Harwood, who usually organises the party at the village hall, said she wanted to replace it with something to cheer up the guests who were missing out.

She said: “It didn’t feel right to ask any of the businesses to contribute this year as there wasn’t going to be a party so we decided to raise the money instead.

“When I first started making the masks it took me a long time but my husband, Paul, cuts the material out for me and I can now make about eight in an hour. Susan then sells them. I must have made around 300 to 400 masks and we sold them for £3 minimum.

“Many people gave more than that though and we had other donations independently.

“Any money left over will go towards next year’s Christmas party to make it more special.”

Mrs Harwood, who lives in Priest Close, and three volunteers who usually help at the party spent a day in the village hall putting together the goody bags and delivering them around Nettlebed and neighbouring Crocker End.

The bags included cheese from the Nettlebed Creamery, mince pies, jam, hand sanitiser, soap and more. The bags themselves were donated by Waitrose.

Mrs Harwood said: “Waitrose or Tesco donate bags every year and last year they donated a lot so we’ve used the leftover ones. Waitrose aren’t even doing Christmas bags this year.”

She made the first deliveries to residents in Lion Meadow with volunteer Anne Jackson.

Deborah Williams, one of the recipients said: “I am very grateful and fatter already looking at the contents of the bag!”

Mrs Harwood said: “We were really lucky — we got them all delivered before it started to rain. The bags were for all the people who support us each year.

The Christmas party has been held in Nettlebed for years and pupils from Nettlebed Community School always come and sing songs while the guests enjoy food, music and the company.

Mrs Harwood said: “A lot of people who received a bag said how sad it was that there was no party but they were all really appreciative to receive the gifts. I had lots of calls thanking us, which was lovely.”