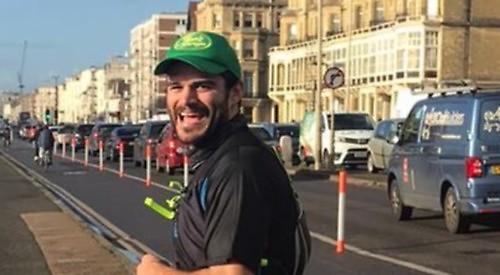 Ed Bowden, who was appointed head of athletic development at Shiplake College in September, came up with the idea last Christmas and set off on January 1.

He had to average about 5.5km a day, although he frequently ran further so he could take days off. He ran on 151 days for a total of about 163 hours.

Mr Bowden, 31, is a keen rugby player and sprinter but wasn’t used to covering longer distances so he started with short runs and built up gradually.

He finished by running the Brighton Marathon course three times in a week as his family lives on the south coast and he is staying there for Christmas.

Earlier this year, he ran 14 routes across London varying from 4.6 miles to 26.7 miles. Each passed a major football ground, including the London Stadium, the home of West Ham United and previously the venue for the 2012 Olympics Games. Mr Bowden hit his target despite contracting coronavirus during the half-term holiday in October, which forced him to take an extra week off work.

Most of the proceeds went to the Harlequins Foundation as he used to coach the London rugby club’s academy squad. A share also went to Prostate Cancer UK and Young Minds, which supports young people’s mental health.

Mr Bowden wanted to include a swimming and cycling element but had to abandon this when the coronavirus lockdown was announced in March.

He said: “A colleague at my last job told me about a friend who had run 2,019km in 12 months so I thought I could match that.

“I tried to be creative and vary it, from squeezing in small runs on consecutive days to doing longer ones less often. I also did three 10km runs on the rooftop terrace of my flat.

“I’m not really a long-distance runner so it was hard to remain consistent while keeping injury-free. I fell behind a bit in the first half of the year but I stayed on target by plugging away at the stadium runs, which covered a lot of distance in quite a short time.”

Since starting at Shiplake, Mr Bowden has been running along the Thames Path, mostly between Sonning and Hambleden, and says his favourite stretch is passing Temple Island on the Henley reach.

Colleagues from the independent school have run alongside him on some days and students have been supportive.

He has also been encouraged by Team GB distance runner Carla Molinaro, who holds a record for running from Land’s End to John O’Groats in just over 12 days.

The pair met when she visited the school to talk to pupils and she agreed to join him for his final run on Sunday.

Mr Bowden said: “It has been lovely exploring this area, although sometimes it’s hard finding a dry route. The Thames Path is very scenic and mostly flat as well.

“The college community really got behind me as the headmaster encourages physical activity. They were also very supportive when I caught coronavirus — it came on very quickly and I was lucky to recover without any long-term effects.

“I had some of the worst fevers I’ve ever had but the school told me to take as much time as I needed. I didn’t worry about being set back as I knew I’d just have to increase the distance of the remaining runs.

“Doing the Brighton Marathon route was strange without the usual road closures and crowds. I did it in 2013 but it’s harder to stay motivated when you’re by yourself.

“I’m very glad to have finished and am looking forward to taking a rest. I’ll definitely have earned my roast turkey on Christmas Day.”

Mr Bowden hopes to organise a sponsored cycle ride from London to Paris for college staff. He is also considering running from the source of the Thames in Gloucestershire to its mouth, a distance of about 300km, in three or four days.

To sponsor him, visit https://bit.ly/3oZAIBT