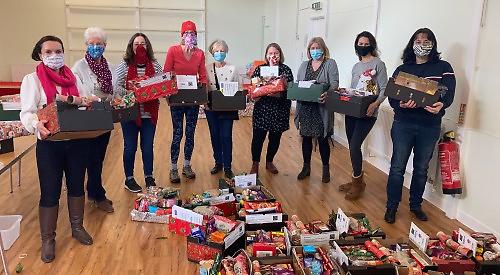 MORE than 90 treat boxes were delivered to elderly residents of Sonning Common after their annual Christmas lunch was cancelled because of the coronavirus pandemic.

The lunch would normally take place in the village hall on Christmas Day but due to the covid-19 restrictions volunteers could not go ahead with the event.

Instead, boxes full of preserves, home-made biscuits, cheese, coffee and other treats were put together last week and delivered to the people who would have attended the lunch.

The recipients also included people suggested by members of Springwater Church in Blounts Court Road and the Fish volunteer centre as being deserving cases.

Sandy Onofrio, one of the organisers, said this was a way of letting residents know that they were still thought of.

She said: “For the last 10 years we’ve hosted a Christmas lunch in the village hall to make sure our local people aren’t alone. For me that is the essence of Christmas.

“It hasn’t been a great year so it’s just a little nod to pepole to say ‘hi’ and let them know we’re thinking of them.”

The boxes were paid for with about £4,500 that was donated by villagers and community groups, including Henley Lions Club and the Chiltern Edge Community Association as well as the Liberty of Eye and Dunsden Poor’s Land Charity.  More than £1,000 was raised by residents online and some older people donated their winter fuel allowance.

A team of more than 20 people packed the bags at the village hall.

“It was a huge team effort,” said Mrs Onofrio.

“I’ve been doing this for years and I’m so bowled over by how many people are willing to give up their time to help people. It really makes my Christmas.”