Injured rider back in the saddle 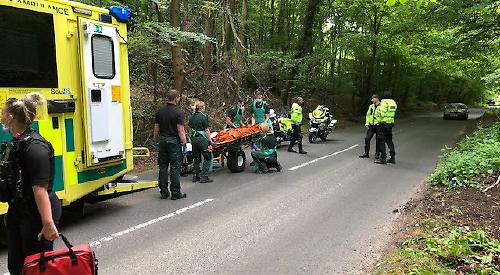 A WOMAN who narrowly survived a horse riding accident is back in the saddle and planning a return to eventing in 2021.

Anna Tomson was crushed beneath her mare Berry when the pair were out hacking through College Wood, off Deadman’s Lane, near Goring Heath, in May.

The animal was startled by some off-road motorcyclists and fell on top of her, inflicting severe internal injuries.

Miss Tomson was in a coma in hospital for four weeks, during which she underwent several operations. She required extensive physiotherapy after coming round.

She rode again for the first time in October and has since completed some small jumps on Berry and now intends to follow a more structured training programme.

She wants to be fit to compete as soon as possible, although it isn’t yet clear how eventing, which combines dressage, showjumping and cross-country riding, will be affected by the coronavirus pandemic.

Miss Tomson, 41, had sent Berry away to be trained by Ryan O’Sullivan, a professional based in Newbury, but moved her back last month to Cane End Stud Livery, where she was stabled before her fall.

She has also returned to work as a data analyst for a catering firm and is about to be discharged by her physiotherapist. NHS rehabilitation specialists say they are delighted with her progress.

“I’m going to keep on mending for a long time but bringing Berry home is another big milestone,” said Miss Tomson.

“I’m very much looking forward to getting back into a normal routine, whatever ‘normal’ looks like in the current circumstances.

“We’ve jumped a few small fences and I’m getting her prepared to be taken out and about again.

“I’ll have to do more training and preparation, which I’ll be seeking Ryan’s help with because he knows her very well, but the idea is to pick up exactly where I left off.

“Berry would usually be out with me five or six days a week, doing everything from jumping and flatwork to going out hacking, but we’ll just have to see what we can achieve from where we are now.

“I feel like I’m going into 2021 in a pretty strong position. I’ve been incredibly lucky with my recovery and couldn’t be more grateful for all the support I’ve had to get this far. It has taken a lot of hard work but it has really been worth it.”

Miss Tomson and Berry, a five-year-old Anglo-European mare, were riding along a bridleway on May 17 when the bikers roared out of the trees behind them.

The engine noise spooked the horse and she leapt into the air, throwing Miss Tomson to the ground. The horse, which weighs at least half a ton, then toppled sideways and rolled over her rider before getting up.

Despite her injuries, Miss Tomson called the livery’s owner Sarah Peters, who is a close friend, but then blacked out due to internal bleeding.

She was found by two walkers a few minutes later and they called 999.

Several ambulances were dispatched while the Thames Valley Air Ambulance landed in a nearby field. Medics battled for hours to stabilise Miss Tomson so they could safely move her to the road.

They eventually got her to the John Radcliffe Hospital in Oxford, where surgeons quickly operated but warned her family that she may not survive.

She was kept sedated for a month to reduce the risk of fatal brain inflammation and put on a ventilator before being slowly brought around.

By July she was finally breathing unaided and was transferred to the Royal Berkshire Hospital in Reading before being discharged just over a week later.

Miss Tomson, of Upper Woodcote Road, Caversham, initially struggled with fatigue and spent much of her time asleep but was soon walking and driving again.

She also undertook aerobic exercise and strength training because her lung function had declined during her coma and the doctors had to cut through her abdominal muscles to save her life.

She eased back into riding by using the simulator at Cullinghood Equestrian Centre, near Tidmarsh. This mimics a horse’s movements at various speeds and films the rider so they can review their technique.

After just three sessions throughout September, it was clear her core strength and balance had returned so it was safe to progress to the real thing.

She first rode Hercules, a black-and-white cob, which is also stabled at Cane End. The pair rode at a walk, trot and a canter for about 15 minutes.

“It was as if I’d never been away, to be honest,” said Miss Tomson. “Nothing about this return has fazed me and I’m just so pleased to be riding again.

“The simulator has pressure sensors which can tell whether you’re applying pressure evenly and not applying too much weight through the reins. After my third session, I was feeling much more secure and decided I was ready to have a go on a real horse.

“They wanted to make sure I could hold my position in the saddle and go with the horse’s movements, which I could, and luckily I’ve got good friends who own some safe and well-trained horses so I was able to start slowly and build up.

“Riding Hercules was an amazing feeling because I’d wanted to do it for ages and I was so relieved that I didn’t experience any pain or feel out of sorts afterwards. I had a good cry when I finished.”

Miss Tomson then increased the number of sessions until she was riding up to five times a week on either Hercules or Indy, a 19-year-old mare.

By mid-November she was out hacking for up to an hour and even went to Deadman’s Lane again, though she is yet to return to the scene of the accident.

She said: “We did go near it and it feels like a massive turning point just to be going out again. There’s a wonderful feeling of freedom that I’d really missed while I was recovering.”

She rode Berry for the first time on November 22, the day before her birthday, under the supervision of Mr O’Sullivan.

Miss Tomson said: “Ryan has done an amazing job with her and she has come on a long way, though she’s a lot bigger than the other horses I’d been riding so it was a bit of a step up.

“Thankfully, she’d been exercised pretty hard the day beforehand so when I first got on her she wasn’t too sprightly.

“She was very well-behaved and I was glad that Sarah came with me because it was a very emotional experience.”

Because Berkshire is in tier 4 of the Government’s coronavirus restrictions, Miss Tomson spent Christmas Day at home with her mother Jacque and their collie Greta.

She said: “It was just the two of us but we didn’t mind celebrating it quietly, although it was a shame that other family members couldn’t visit.

“As I’ve continued recovering, Mum has naturally felt a bit of concern about me riding again — she’s only human and I think that’s a pretty normal reaction.

“At the same time, though, she understands why I love it and now is the right time to get back out there.

“All my friends at the yard feel the same and want to make sure that I’m all right but I’m showing that I’m ready so their worries should subside over time.

“It’s lovely to know that they care but I could never pack up and walk away from such a huge part of my life.”