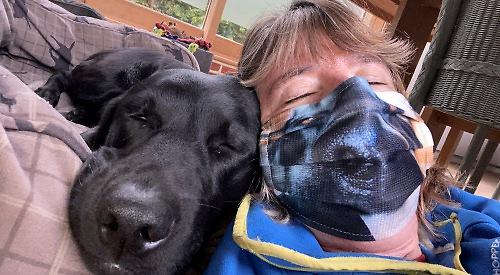 MORE than 200 pupils, teachers and governors at Shiplake College took part in its online dog show.

The independent school staged the event instead of its annual FieldFest and real-life dog show, which would have taken place in September but was cancelled because of the coronavirus pandemic.

Organisers wanted to still do something as more than 30 dogs live at the school off Reading Road and they are a big part of pupils’ lives.

Prizes were awarded in seven categories and the winners of the main three will be presented with a portrait of their pet painted by artist Clive Hemsley, of Hart Street, Henley.

These included year 8 pupil Freddie Coultas, who won the Best Buddies category with a photo of himself holding his cocker spaniel Bingo.

Ben Savidge, also in year 8, won the You’ve Been Framed video category with a clip of his Cavapoochon puppy Buddy escaping from his enclosure at home.

The third portrait winner was former pupil Katie Manning, who put forward a photo of her cocker spaniel Stanley in a field of lavender for the Perfect Pawtraits category.

There was also a Best of the Rest category for other animals which was won by year 12 pupil Gina Mckie-King and her pony Echo.

The entrants were judged by the entire school community and 1,500 votes were submitted.

Catherine Brazil, the school’s events officer, said: “It was such a disappointment not to be able to host our usual dog show so in a bid to lift spirits and have a bit of fun, we introduced the virtual one.

“Thanks so much to everyone who took part, either by entering or voting. It was such a pleasure to
co-ordinate and we hope everyone enjoyed viewing the entries as much as I did.”

The portraits, worth £280 each, are sponsored by Henley investment firm TriQuant.

The runners-up were as follows: