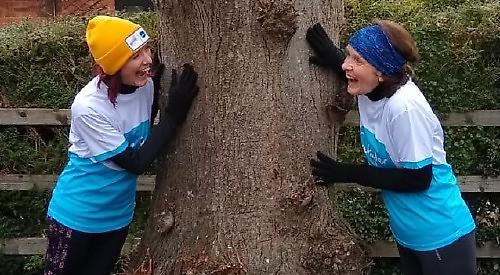 TWO women from Henley ran at least 5km every day in December in aid of Sue Ryder.

Anita Downing and Mandy Sadler were taking part in the charity’s Daily Dash challenge and have so far raised more than £1,200.

The money will benefit Sue Ryder’s palliative care service for South Oxfordshire and outpatient “hub” at Battle Barns, near Crowmarsh Gifford, which houses a telephone advice service and home visiting team as well as day therapies.

Mrs Downing, who lives in Reading Road, signed up as the charity cared for her late husband John at home before his death in April.

She took up running over the summer and it has since become a regular hobby despite a brief break in October due to injury caused by increasing her mileage too quickly.

Mrs Sadler, who lives in Greys Road, offered to join her as a friend died some years ago at the Sue Ryder hospice in Nettlebed, which closed last year.

The pair became friends through music as Mrs Downing is a classical pianist and teacher and Mrs Sadler is programme director of Opera Prelude, a charity which supports young opera singers.

The women mostly ran separately but sometimes they did so together at a safe distance in line with the covid-19 guidelines.

Mrs Downing mapped out several routes using the Strava tracking app. She ran up a total of 203km during the month, a daily average of just over 6.5 km.

She said: “I wasn’t looking forward to my first Christmas without John and found this year that running really kept me stable so it felt like a good challenge to try. I was delighted that Mandy was willing to try when I mentioned it.

“I’m elated to have finished as it was hard work and I didn’t always fancy going out in poor weather but there were some fun times as well.

“Henley has some great routes and people really made an effort with their Christmas lights in the evenings.

“I’m pleased to have lasted the course but I won’t keep up running every day because it’s hard on the body. I’m really grateful to everyone who supported me.”

Mrs Sadler, a mother-of-two who lives with her husband David, said: “I wasn’t a great runner when I agreed to do this as I only started in November but I’ve probably improved a lot.

“Now I’m very keen to keep it up and maintain my new level of fitness. I’m a keen cyclist but it uses different muscles so you’re challenged in a very different way. The last few days were especially tough and left me extremely achy but I kept going even when it was muddy, dark, wet or icy.

“On one occasion, I ended up clinging to a barbed wire fence on a lane near Remenham to let a car pass.

“There were some lovely days, too, which made me realise how lucky I am to live in this beautiful area.

“John has been in our thoughts and I know the Sue Ryder nurses were so helpful to him and Anita so I was very happy to join in. It’s a very caring and professional charity.”

To sponsor the pair, visit justgiving.
com/december-daily-dash-20202021 or justgiving.com/mandys-fundraising-
page2021

• Mr Downing worked for the Daily Express for more than 40 years and was made an MBE for services to journalism in 1992. He died. aged 79, of mesothelioma, a cancer of the lining of the lungs.