Patients wait to hear when they will receive coronavirus vaccine 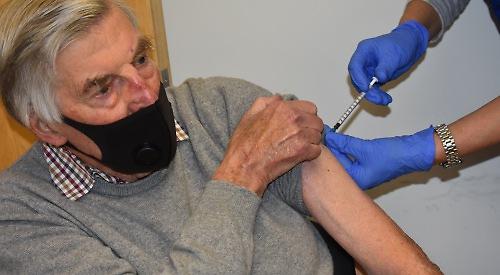 PATIENTS in the Henley area are waiting to hear when they might receive a dose of the coronavirus vaccine.

Health authorities approved the use of the Oxford-AstraZeneca jab last week and ordered 100 million doses, enough to immunise 50 million people as it must be administered twice.

When combined with a full order of the Pfizer-BioNTech vaccine, which received the go-ahead on December 2, there should be enough to protect the entire population.

The first 530,000 doses of the newer jab were set to be given nationwide this week, with care home residents, the over-80s and healthcare workers having priority.

Unlike its counterpart, which must be stored at minus 70C and will degrade after 120 hours out of the freezer, the Oxford vaccine may be kept in a fridge so it is easier to transport.

Elderly patients at the Churchill Hospital in Oxford were given it on Monday but neither Oxfordshire’s NHS clinical commissioning group nor NHS England, which distributes the vaccine on the Government’s behalf, could say when it might be rolled out in the Henley area.

Both said efforts were being made to introduce it as quickly as possible, echoing a pledge by the Prime Minister, and promised more announcements as soon as dates could be confirmed.

AstraZeneca says it should be able to manufacture more than two million doses a week, each of which could be given up to 12 weeks apart so the vaccine is up to 90 per cent effective.

There should be a widespread protective effect from the spring.

A commissioning group spokeswoman said: “The Oxford-AstraZeneca vaccine roll-out will help ensure that as many people as possible quickly benefit from a first dose while infection rates are so high and our health services are under great pressure.

“Getting both doses remains important so we would urge people to return when they are called. It is important that anyone who has the vaccine continues to follow guidance on social distancing and wearing a mask as well as any additional measures where they live.”

Meanwhile, hundreds of pensioners in Henley and surrounding villages have received their second dose of the Pfizer-BioNTech jab.

Almost 1,000 patients of the Hart and Bell surgeries in Henley, Nettlebed Surgery and Sonning Common Health Centre returned to the Henley sites for a follow-up on Tuesday and Wednesday.

A smaller number also returned to the Wargrave Surgery, which is part of the Berkshire West clinical commissioning group and was sharing its trial batch with another practice in Tilehurst.

The patients, all aged over 80, were among the first in Britain to receive their jabs on December 15 and 16 because they were in a vulnerable age group but otherwise in good health.

Their counterparts at Goring and Woodcote’s joint medical practice and the Mill Stream Surgery in Benson got their first jab at Wallingford Community Hospital on December 21 and will return for the follow-up on Monday.

The sessions went ahead despite surgeries elsewhere in Britain postponing second jabs, saying they would still be effective with a gap of up to 12 weeks.

Those who attend Watlington Surgery are yet to receive any, as are those at practices in Caversham and Emmer Green.

It isn’t yet known which of the two vaccines will eventually be offered to younger age groups.

Dr Kiren Collison, who chairs the Oxfordshire commissioning group, said: “The vaccination programme is very complex and we are working hard to ensure our most vulnerable patients are protected as quickly as possible.

“Other age groups and cohorts will be offered the vaccination in a phased way, in line with national priorities, but we need to expect this is going to take time.

“Meanwhile, we can all do our bit by continuing to keep ourselves and others safe by socially distancing, wearing a face covering and following the hand hygiene guidance.”

Patients are urged not to make enquiries about their jab but to wait for a letter of invitation.