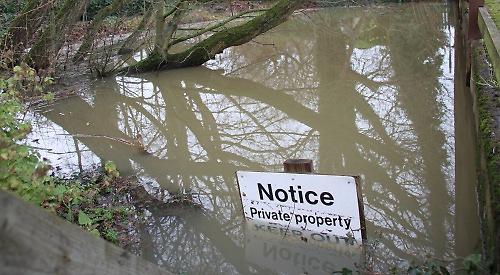 RESIDENTS of Shiplake say flooding at Christmas has proved the risks of a developer’s plans.

The water level of Lash Brook, off Mill Road, rose sharply on Boxing Day and only began dropping a few days later.

The brook is where Taylor Wimpey is considering draining surface run-off water from its Regency Place development at the former Thames Farm in Reading Road.

Residents, whose back gardens are next to the backwater, say this would make the existing winter flooding problem even worse.

They have sent videos and photos of their gardens to South Oxfordshire District Council, which is due to consider whether to approve Taylor Wimpey’s drainage scheme.

Mill Road was severely flooded throughout late 2013 and early 2014 and at one point was underwater for several weeks, during which residents had to be evacuated.

Ian Cruickshank, who lives in Mill Road, took photographs of the most recent flooding at its peak.

In a letter to this week’s Henley Standard, he says: “Just one inch of rain falling over the 5.7-hectare Thames Farm site will equate to 1,370,000 litres of water being discharged into an already flooded area.

“This will just cause further problems for Mill Road residents and should not be allowed by planners.”

Nathalie McClure, who lives in Mill Road with her husband Gavin and their son Cameron, 10, said their home had been surrounded by water. Their back garden, which the brook runs through, was unusable while at the front it was above ankle-deep so they had to put on wellington boots to leave or enter the house.

The ground floor of the house would have flooded had the couple not replaced it and raised the foundations in 2017, two years after they moved in.

Mrs McClure said: “We knew the house was on a flood plain when we bought it but the problem has become worse in recent years.

“Lash Brook burst its banks in our first four winters but in 2019 it was particularly bad and left us as an ‘island’, which was inaccessible without wellies. It got so bad that we needed waders at one point.

“This last year wasn’t too bad initially — there was a little rain in October and November, which left the ground waterlogged, but as soon as there was a heavy downpour it couldn’t cope.

“We moved all our valuables out of harm’s way on Boxing Day and moved the car too just in case. It was the little things like taking the dog out — he hates water and swimming so I had to carry him each time. Everything became a delicate operation and we had to use the car as a changing room to put on some decent shoes.”

She added: “I hate to think what might happen if the Thames Farm plan goes ahead. If there was any more water pouring into Lash Brook, we worry that we’d have less time to sort ourselves out. The danger is always at the back of your mind and it’s a bit stressful.”

Taylor Wimpey has planning permission for 95 homes but was forced to come up with an alternative drainage scheme when it discovered last year that the ground was prone to developing sinkholes.

It proposed diverting water using a new pipeline along Reading Road, Station Road and Mill Road and out into Lash Brook, with the support of Thames Water.

However, it is also now considering alternatives and has promised to consult the public further before submitting any new plans and to make further announcements. The district council was going to consider the scheme on the basis of a consultant’s report which stated there were no viable alternatives and it wouldn’t increase the flood risk.

But then it told the developer to carry out a full flood risk assessment following an outcry from residents, including Mrs McClure.

She said: “When we applied for planning permission for our house in 2017, we couldn’t build even a tiny bit bigger than the previous one because they were worried about increasing the flood risk.

“There were lots of conditions so it was quite upsetting to hear about the application because Thames Water seemed to be giving the developer free run to do whatever it wanted.

“I thought it would be dismissed out of hand and was really cross when I realised they were seriously entertaining the idea.

“It’s true that the water has always been close to our homes but if it flooded more often, it would be a very different ball game in terms of insurance and potential damage.”

Peter Boros, of the Thames Farm Action Group, said: “I’ve sent photos and videos to Taylor Wimpey and the council saying, ‘this is what Lash Brook looks like on an ordinary winter’s day’.

“From the talks we’ve had, though, it looks like that scheme is on the back burner while they look at other ideas.”

Taylor Wimpey said: “We appreciate that the drainage strategy for our Regency Place development is a cause of concern for residents and would like to reassure the community that we are looking at a number of options following the feedback we have received.”