Appeal for evidence of problem lorries 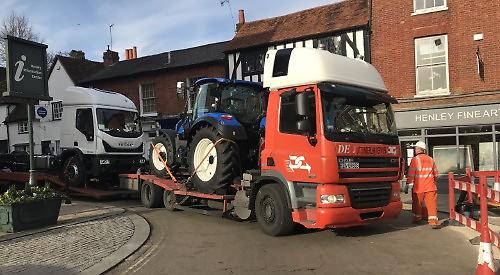 RESIDENTS of Henley are being asked to provide evidence of heavy goods vehicles causing problems in the town.

The appeal was made by Amanda Chumas, of Bell Street, who launched the campaign for Henley to have a 7.5-tonne weight restriction on vehicles.

She is concerned about the safety of pedestrians and the impact on air quality and Henley’s historic buildings.

Mrs Chumas wants people to take photographs of incidents and send them to a new email address together with the date, time and location.

She hopes this evidence will help persuade Oxfordshire County Council, the highways authority, of the need for a traffic regulation order.

The scheme would cost about £125,000 and would be enforced using automatic number plate recognition cameras and a database of legitimate road users.

The order would apply within a five-mile radius of Henley to include villages along the B481, which leads south off the M40 through Christmas Common and Nettlebed towards Henley.

It would not stop lorry drivers who have legitimate business within that area, but only those who use Henley as a shortcut.

Similar schemes have been approved for Burford and Chipping Norton and nearly 2,500 residents have signed an online petition in support of the Henley campaign.

He has already won the support of South Oxfordshire District Council and parish councillors from Bix and Assendon, Nettlebed, Kidmore End, Sonning Common and Rotherfield Greys.

Councillor Gawrysiak said: “I am very confident that councillors will see the absolute merits of the case and I am equally confident they will pass the motion to begin an investigation with a view to implementing the traffic regulation order.

“In terms of an air quality measure, we have a very strong case. Currently, the particulate monitor at the bottom of Greys Road is indicating levels above World Health Organisation limits.”

In the same month, a Camfaud crane lorry became stuck on the corner of Bell Street and New Street due to a damaged clutch and causeed tailbacks.