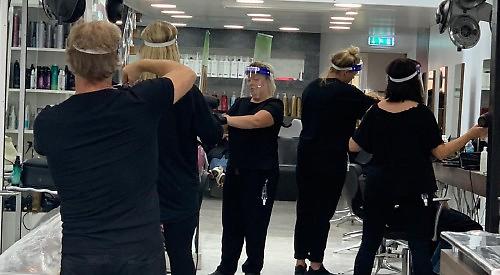 BUSINESS owners in Henley say the grants being offered by the Government will not be enough to offset the damage of the latest lockdown.

People in retail, hospitality and leisure can apply for between £4,000 and £9,000 per property depending on its rateable value.

This is part of a £4.6 billion package announced by the Treasury, while the employee furlough scheme has been extended to April.

The national lockdown has forced all non-essential businesses to close for the third time since the outbreak of the coronavirus pandemic, meaning they still have bills to pay while receiving no income.

Julie Giamattei, a director of the hairdressing chain Marc Antoni, which has salons in Henley and Caversham, said the grant money was not enough.

“It will just be swallowed up straight away,” she said. “We are struggling with rents and rates.

“Even before the lockdown, we were 35 per cent down on footfall compared with the same time last year. We wouldn’t have been able to survive without the furlough scheme — I don’t think any business would have.”

Her husband Simon, 55, also a company director, said: “I don’t even want to think about how much money I’ve had to spend on PPE.

“I am sure we will bounce back but we have a mountain of debts to pay off. They’re not charging interest but the banks will want their money back.

“We just don’t want it to beat us because we’ve been in business since 1966. It puts a lot of stress on the family and it is our livelihood.

“We are at a point of our lives when we should be thinking about taking it easy but this has probably added another five years to our work.”

The directors of the business are not eligible for the furlough scheme, so each receives only about £750 per month as a dividend.

They are pinning their hopes on an insurance claim after they took out a £250,000 bank loan last year to help cover wages and rent.

The claim was rejected but that decision was then overturned when the case was taken to the High Court by Financial Conduct Authority, the industry regulator, only for their insurer Hiscox to appeal. If the appeal is rejected, Marc Antoni would receive £100,000 for each of its five salons.

Jamie Belcher, who runs Bell Street Barbers, is to apply for a £4,000 grant.

“Every little bit of money helps,” he said. “If this only went on for another month, it would be a great amount but that’s highly unlikely.”

He stopped trading just before Henley was put into tier 4 shortly before the lockdown.

“It wasn’t much of a shock when they announced the lockdown but it is still frustrating,” he said.

“It is tough because we have no idea how long this is going to go on for. I don’t think I am going to be able to open again until March or April, so it is worrying.”

Mr Belcher, who lives in Sonning Common, added: “I was really busy before Christmas. I managed to break even, which was great.

“Normally January is very quiet and I would hope to make enough money in December to help see me through the first few months of the new year.

“I would imagine that when I get the grant it will all just go straight back to the taxman, which is not ideal because I don’t quite think that is what it is designed for. All these grants are taxable and I don’t understand why they don’t just give you less to start with.”

David Rodger-Sharp, who runs a jewellers of the same name in Duke Street, is to apply for a £6,000 grant.

He said: “It is nothing in comparison to the original grant of £25,000 that we got in March but there isn’t an endless pot of money.

He has furloughed his nine staff while the shop is closed,

Mr Rodger-Sharp said: “The Government are trying their hardest and they know if they don’t do something they will end up with a whole load of people being unemployed.

“This gives us a little bit of peace of mind but there are lots of costs to cover like rent, utilities and tax.

“Fundamentally, the safety of people is far more important than a few shiny objects.”

Christian Jonkers, owner of Jonkers Rare Books in Hart Street, said the £6,000 grant he is eligible for would “barely scratch the surface”.

He said: “Something is better than nothing and I wouldn’t want to appear ungrateful but it is not significant. We are unlikely to be able to open again until March at the earliest and I might even go as far as to say until Easter.

“Every little helps, but it doesn’t make up for what we will lose in terms of not being able to keep the shop open.”

He owns the freehold of his building, so doesn’t have to pay rent.

Mr Jonkers added: “We are fortunate to be fairly well resourced and therefore we can weather these storms without too much difficulty.”

Antony Reineke, who runs Studio 35 jewellers in Duke Street, is to apply for a £6,000 grant.

He said: “It is certainly helpful. If the shop is closed and you can’t make any money then any help you get from the Government is good.

“Whether it will be enough we don’t know, but we understand what they are going through.

“Running a jewellers is quite an expensive operation, so it probably won’t cover a full month’s costs, but it is as close as possible to taking care of January.

“It is not like we need the shop to be able to function because we can still use our workshop. We can operate through our website and phone calls.

“If the lockdown extends beyond one or two months, that is when it starts to get more difficult for us.”

Laurence Morris, of Laurence Menswear in Duke Street, said: “I don’t think the lockdown came as a surprise to anybody.

“I was hoping that it wouldn’t go on longer than the end of January but it looks like it’s going to. We had a good December so that has covered the fact we weren’t open in November. The grant will help us with not being open in January.

“The downside is we are left with supplies of autumn stock that would have usually been sold in the sale, which will be carried over to next autumn.

“There are a lot of questions regarding how long this is going to go on for. Until we see the evidence in the figures, it’s impossible to set a finite date. I think mid-February will be achievable and that the Government will do everything it can to get these vaccines out.”

Gyms will particularly feel the effect of the lockdown as they would typically experience an influx of new customers in January.

Joanne John, who runs Fitness Space Henley at Centenary Business Park, said: “Like everyone, we worry about the longevity of this situation and how long it will go on for.”

She will be applying for a £6,000 grant. Ms John said: “It will be great to have it and it takes away some of the pressure and the worries I face as a small business owner. Equally, it is only a drop in terms of our regular outgoing payments and overheads. Our rent is £4,500 per month,

“What do we do in February and March and even in the next quarter because the effects of this will be felt for a very long time?

“January is normally the month where we feel quite buoyant and we had lots of plans to try to catapult the business based on the challenges we faced in 2020.

“A lot of time was spent on marketing to try to get back old members but that has all been wasted now.”

Miss John, a former member of the British bobsleigh team, said she was grateful to still have the furlough scheme but was frustrated by the Government’s apparent lack of planning.

“The longer it goes on, the harder it is for us,” she said. “One month is okay and we can knuckle under but by the third month it starts to become more challenging.”

Chris Preston, who runs Expert Fitness Studio in Bell Street, is eligible for a £4,000 grant.

He said: “It doesn’t even cover wages, let alone the cost of the business, but it will help us to tick over.

“The grants have allowed us to get through this because we work as self-employed trainers, so they are a lifeline. We are hanging on in there and hopefully people will want to come back when we re-open.

“We are doing a collection of digital classes online but we don’t make any money from those. We need to get back to doing one-to-one sessions because that is where we make our money.

“I know it is the right thing for us to do to close down and I know it is very important to stop the virus.”