Opposition growing to plan for hotel on station car park 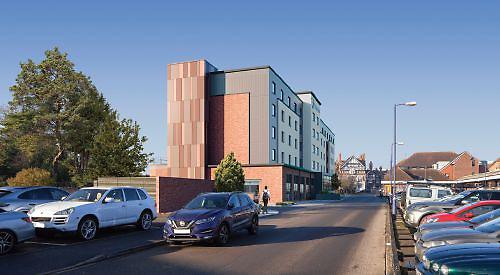 OPPOSITION is growing to plans for a hotel on the car park at Henley station.

Neighbours and town councillors are concerned that the Premier Inn would be an “eyesore” and bigger than necessary.

The company is seeking feedback on the proposed five-storey hotel before applying for planning permission.

The hotel would have 115 bedrooms and a restaurant with 92 covers.

About 60 of the station’s 249 parking places would be built on, although 12 new bays, including some for disabled people, would be created by removing a nearby drop-off point for coaches.

The company would create 55 more spaces at Twyford station, the other terminus on the Henley branch line, where there is currently a shortage of bays.

Twyford is also due to become part of the Crossrail route, which is set to open next year.

Residents of Wyndale Close, which backs on to the car park, spoke against the proposals at a meeting of the town council’s planning committee.

Anna King objected to the design and size of the hotel as well as the potential loss of residents’ privacy and the impact on parking in the area.

She said: “It is really worrying that it will be the first thing that a resident or visitor to the town will see.

“It surprises me how out of keeping it is with our historic market town and it will remain an eyesore for decades to come, should it go ahead.

“I don’t feel any effort has been made on behalf of the developers to adapt their design to the local surroundings. It is almost as if they have dumped their motorway service station blueprint on our town.

“It will become one of the tallest buildings in Henley and will materially alter our skyline for the worse and that’s quite a scary thought.

“I see this car park out of my window every single day and for years it is near full capacity daily. I fear those cars will go to our already overstretched car parks.”

Viviane Ghyus said: “We feel that the building is totally out of character in proportion to the site and its location.

“Our garden backs on to the car park and the hotel would totally transform and dominate the view. The hotel would deprive us of light in the day.

Councillor David Eggleton said: “I’m not in favour of this. I think it is unsightly. If it was done on a smaller scale and there wasn’t an impact on the residents living in the area, I would be for it.”

Councillor Will Hamilton said: “Limit the size to three storeys. If they need a fourth storey they should go down. They should do car parking underneath.

“I believe we’ve got to seriously look at the design — it should be brick and flint and should have some beauty to it.

“I’m concerned for the residents of Wyndale Close and would ask the developers to look again at lowering it and moving it away from the area.”

Councillor Donna Crook suggested that many of the 35 jobs the developers have said the hotel would create would pay only the minimum wage, which the firm says is not true.

She said: “It’s not going to provide fantastic jobs for the town, they are just doing it for the shareholders.

“I’m concerned that they will have to ship in everything for the hotel, which will increase heavy goods vehicles.

“It will have a severe impact on our hospitality trade and could result in some businesses closing.”

Councillor Rob Romans said he would prefer to see the Imperial Hotel in Station Road re-open. This was closed in 2006 by the owner, Dr Raymond Crockett.

In 2013, he began refurbishing it with plans to re-open the hotel with a new restaurant and bar but the plan fell through.

Cllr Eggleton said: “I don’t think you’ve got any hope in hell of getting someone to re-open the Imperial Hotel. It is a shame because it is a nice building.”

Councillor Stefan Gawrysiak was the only member to support the plans but he said there were issues to resolve.

He said: “This could actually be good for the Henley economy but there must be sufficient car parking.

“This is a 115-bed hotel, so there has got to be at least that many spaces and no loss of spaces in the station car park.

“The height of the hotel is of concern and also the light pollution going into the houses on Wyndale Close. There are some design features that we really have to get right on this.”

The Henley Society has objected to the plans.

David Whitehead, chairman of its planning committee, said: “I can see this hotel being used at peak times like Henley Royal Regatta and the festival... but it’s hard to imagine it being occupied all year round.

“The design is horrendous — it’s very functional and looks like something for business trips but Henley doesn’t attract that sort of trade and I don’t think tourists will want to stay in a car park next to a noisy station.

“It’s too high for its surroundings and is just a standard boxy building.”

Premier Inn says it believes there is a shortage of accommodation in Henley and that its planned hotel would be “a positive addition”.

Paul Smith, the company’s acquisitions manager, said: “It was good to re-engage with Henley Town Council and we will reflect on the feedback of the discussion and the council’s response as we finalise our plans.

“As a direct distribution business, we are in a unique position to understand and respond to customer demand for our hotels in locations where we are not currently represented.

“We are bringing forward plans for a new hotel at Henley station to respond to consistently high demand from our customers for a Premier Inn in the town as well as a detailed understanding of the local accommodation offer.

“Premier Inn offers a different style of accommodation to independent hotels. We also bring a package of benefits to all our new locations, including many permanent and flexible jobs, with training and development opportunities, paid at or above the national living wage.

“We believe a new Premier Inn at Henley station will be a positive addition to the town and we’re looking to invest for the long-term.

“The benefits we will bring and how we have designed the hotel to its setting and to a high sustainability standard will be set out in detail in our planning application.”

The car park would be improved and extra landscaping carried out, while trees would be retained. There would also be a new pedestrian crossing between the hotel and the station entrance.