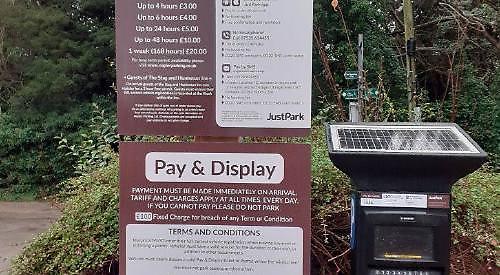 WALKERS say they are disappointed at the introduction of charges in two rural car parks that they use regularly.

The facilities next to the Stag and Huntsman pub in Hambleden and in Skirmett Road, Mill End, have been free to use since Wycombe District Council sold them to the Culden Faw Estate in 2015.

But now charges have been brought in by the estate, which is owned by billionaire Swiss financier Urs Schwarzenbach, because it says it needs to cover the cost of operating the car parks.

The fees, which range from £1 for up to an hour to £20 for a week, apply at all times of the day, and are administered by JustPark.

Alie Hagedoorn, who chairs the Henley and Goring Ramblers, said: “We think it’s a pity. I’m not convinced the estate has to do this to survive.

“The Hambleden area is so beautiful for walking so we have lots and lots of walks from there.

“This doesn’t make it easy to go walking. It limits the possibilities, especially for those who have a tight budget. With covid, a lot of people want to go walking or maybe they have been affected by not having as much money as normal, so I think it’s bad timing as well.

“We will still be using the car parks but some walk leaders may choose another area instead to walk. I’m quite convinced there will be fewer walks from there due to these charges.”

His group uses the facilities at least once or twice a month and has between 10 and 20 walkers each time.

Mr Zelin said: “It’s certainly unfortunate when everyone’s trying to encourage walking and enjoying the countryside and so on.

“I’ve been walking 20 or more years and it’s just another popular car park that has succumbed to charges.

“It’s not ideal but I don’t know how much we can really do about it.

“I think most walk leaders will carry on starting there. It’s still worth it because of the enjoyment we get from going out for a walk and meeting people.

“It probably means we need to think a bit more about sharing cars, which is not easy because we come from quite a wide area.

“We do get large numbers and we can’t just park in a layby. We don’t want to sort of clog up the village. We want to make sure we park considerately.”

Mr Zelin said he understood that when the car parks changed hands there was no agreement for free parking to continue.

Estate manager Alex Dick said he understood that people may not like paying to park but there were costs incurred in providing the car parks and the associated facilities, including the public toilets at Mill End, insurance, repairs, rates and security.

He said: “We’re a business that has substantial costs to cover and it was a fairly easy decision to put in parking charges to cover these.”

Mr Dick said people parked at the pub with no intention of going inside, except perhaps to use its toilets.

He explained: “We have now introduced a system where anyone using the Stag and Huntsman pub can get free parking.

“It hasn’t affected business in any way — in fact, the opposite. People who need to get to the pub can actually park there.”

Villagers only found out about the sale of the land in 2017 — two years after the sale — and were concerned then about charges being introduced.

At the time, Mr Dick said there were no plans to charge residents but because the estate was charged business rates on the car park it was “investigating means of recouping those costs”.

The estate had given the parish an area of land near the pub car park for use for village events for a nominal sum of £1, he said.