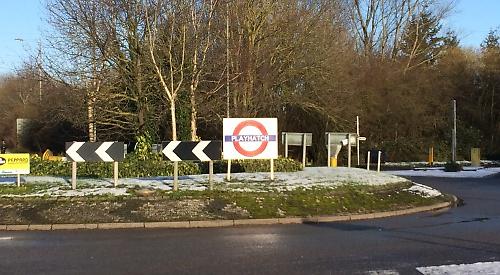 THE mystery practical joker of Sonning has struck once again with more pieces of art.

Large signs resembling those seen at London Underground stations have been placed on the Playhatch roundabout and the one at nearby Sonning Eye, spelling out the names of the places respectively.

This is by no means the first hoax. In April 2019, a white missile was partly buried in the grass on the Playhatch roundabout and in November that year, a giant humbug sweet with red tinsel wrapped around it appeared.

In 2014, a giant Google Maps-style “pin” was erected on the roundabout followed some months later by an empty tent and a clothes line.

The pankster’s other artworks have included a pair of mannequin legs with white socks disappearing into a toilet bowl.

In 2013, a postbox appeared overnight on Sonning Bridge.