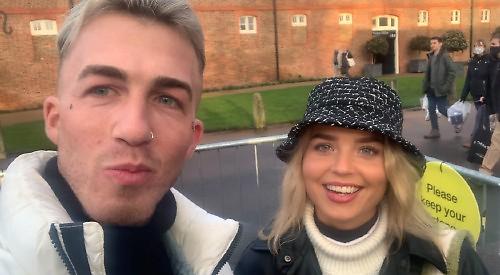 A WOMAN from Henley has appeared on a new reality dating show.

ITV’s The Cabins pairs two people and provides them with a cabin in the Lake District to stay in with the hope of sparking a romance.

Each couple decides every morning whether to stay another night, leave the cabin together or walk out alone.

Alexandra Hanson, 22, applied to take part in the show after some friends pointed out the producers were looking for participants.

She was selected and matched with Nathan Anthony, 22, a model and personal trainer from Bournemouth.

The pair stayed for three nights in total and left the cabin together but have since decided there is “no spark” between them. They have remained friends since the show was filmed.

Miss Hanson said she was grateful for the experience and it had helped give her more confidence. She said: “It was a very intense experience — imagine going into a cabin with someone you don’t know and speaking to them for 15 hours straight.”

Miss Hanson, a former pupil of Valley Road Primary School in Henley and Queen Anne’s School in Caversham, started her social media channel @thecocktailvibe during the first coronavirus lockdown in April last year. She teaches her fans how to make cocktails and now has more than 65,000 followers on TikTok and 2,500 on Instagram.

She applied for the show in October and had a phone interview, followed by a video interview before being chosen.

She said: “I think I mainly got accepted because of the cocktail business so it was clear I’m outgoing and fine in front of the cameras, which is important. There were 23 cameras that were filming 24 hours a day.”

Miss Hanson quarantined for two weeks before travelling to the Lake District and spent a further three days self-isolating in a hotel.

Contestants had to have a negative covid-19 test before being sent into their cabin.

Miss Hanson said: “It was very much on the day. They came in and said, ‘You’re going in,’ so I packed everything and left. I arrived before Nathan and was so nervous.”

She wore black leather trousers with a white blouse when entering the cabin for the first time. She told viewers that her ideal match was “someone with muscles” and a similar lifestyle to herself.

She said her reason for going on the show was because she already knew “most of the men in Oxfordshire”.

Mr Anthony entered the cabin wearing a blue suit jacket and gave his prospective partner a bottle of champagne.

Throughout the show, the pair were seen using face masks, drinking hot chocolate, toasting marshmallows and even kissing in the hot tub.

Miss Hanson, who lives with her parents, two sisters and their dog, Zuki, said: “There was no music and we couldn’t do any of the planned activities in the Lake District due to the pandemic.

“I really enjoyed it, though, and we did some workouts and played games and on the last day we went fishing.”

Couples would write a shopping list every day and have the food delivered to the cabins. “I ended up doing all the cooking!” said Miss Hanson. “I wouldn’t recommend this method of dating — it’s a lot more intense than your usual dating experience.

“But it forces you to get to know someone inside and out as you ask them every possible question you can think of.

“I will say I will never be scared about awkward silences on dates ever again as I now know how to fill them. What I’ve learnt is that I can talk for England — it has made me confident talking to the camera and thinking about what to say next.”

Miss Hanson, who graduated from Cardiff University with a degree in sociology and social policy, said she would consider doing television work again if given the opportunity.

However, she wants to focus on becoming an estate agent after completing an online diploma.

She said: “I’ve been looking at a career in property because I love sales and talking to people — I hope to carry on with my business as well as I really enjoy it.”

Miss Hanson decided to start @thecocktailvibe because she was struggling to find a job during the first lockdown.

She said: “I decided to start my own business using social media to promote it.

“I had originally wanted to review different cocktail bars around the UK but the pandemic stopped those plans. So I built a bar myself instead using recycled materials and had over 60,000 followers in just a few months.”

Drink brands now sponsor Miss Hanson to use their products in her videos and she hopes to pursue her dream of reviewing different drinks in the future.

As for dating, Miss Hanson said she wants to focus on her real estate career for now.

“It’s hard to meet up with people during the pandemic anyway,” she said.