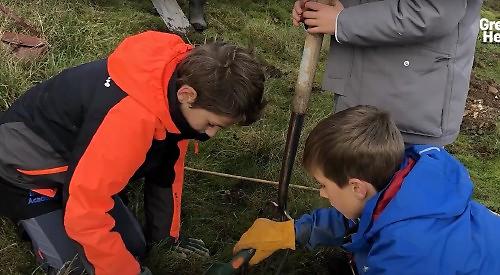 A FILM calling on John Howell to support a proposed law to tackle the climate and ecological emergency has been created by Greener Henley.

The environmental campaign group wants residents of the MP’s Henley constituency to sign a petition calling on him and his Conservative colleagues in Oxfordshire to back the Climate and Ecological Emergency Bill.

The film, which explains the Bill and why it needs support, was created by professional film-maker Jamie Grant and features Patrick Fleming, chairman of Greener Henley.

It says that great strides have been made locally to address the impact of climate change and conserve natural habitats, such as tree planting and the declaration of a climate emergency by Henley Town Council, but this is not enough and national action is needed.

The film also features footage of flooding in Henley.

Mr Grant, who lives in Gravel Hill, Henley, spent about a month making the film, which is almost three minutes long.

He said: “I saw there was a push to effect more change, not just at local level but nationally, and I was inspired by that. I saw an opportunity to get that message out.

“I wanted to tell the community ‘We’re working really hard to fix this issue locally but we can’t do everything’. That’s why we need our MPs in Oxfordshire to step up and support this.

“I’m assuming people understand what’s at stake now and I’m taking that as a base point and going into the nitty gritty of what the Bill is.”

Mr Grant said he hoped that having business leaders such as Mr Barry and Mr Lindley involved would encourage more people to support it.

He said: “I don’t think this video is the be all and end all of this campaign and there will be more needed to be done and more conversations with the community, but it is a starting point.”

Greener Henley has joined the CEE Bill Alliance Oxfordshire, a group working to raise awareness of the proposed law.

It says the Bill offers a bold new approach to dealing urgently with the climate-nature emergency and seeks to enshrine the UK’s commitments on climate change under the Paris Agreement into law. It would:

• Ensure that the UK reduces greenhouse gas emissions in line with its legal obligations to limit global heating to 1.5C.

• Account for our entire carbon footprint in calculating emissions.

• Protect nature and actively conserve ecosystems to reverse the decline in biodiversity.

• Empower ordinary people to have a real say on solutions in a citizens assembly.

Kate Oldridge, a member of Greener Henley who is promoting the CEE Bill campaign, said: “The pandemic has reminded us that the world can be upended in ways we can’t control.

“It is crucial that we take action now to protect us from the worst effects of the climate and ecological emergency.

“We want to preserve our beautiful countryside and stimulate our local economy. The Bill will help us to achieve this.

“The video highlights how the impact of the climate and ecological emergency on our town and environment is real and imminent: we can expect to see more flooding, worsening air quality and irreversible loss of biodiversity if we don’t act now.

“The Bill will allow us to mitigate the worst effects of the climate emergency.

“I believe that Henley residents will choose a future where our community’s prosperity and wellbeing go hand in hand with a thriving natural world, rich in biodiversity; a future where cleaner air and water and healthy local food can be enjoyed by all residents.

“We’re living now in the sixth mass extinction. We have got a serious problem in relation to the decline of our eco-system. If we don’t respect the natural world... our way of living can be so dramatically impacted.”

Mr Howell has said that climate change is the “all-important issue” of this generation but that the Bill doesn’t approach it in the right way.

He said: “There are many errors with the Bill, which is not surprising. As it stands, it is an imperfect way of tackling this problem and I think imperfections have damaged the Bill beyond recovery.

“I’m not going to vote for it because I think the imperfections make it the wrong Bill to support.

“Besides, you have got to look at what we’re already doing and achieving and the enormous successes we have had.

“The amount of electricity produced from renewable resources now is fantastic.

“The answer is to carry on doing all the things we’re doing and to continue delivering.”

To see the film, visit https://youtu.be/cvCM_AtDi7A