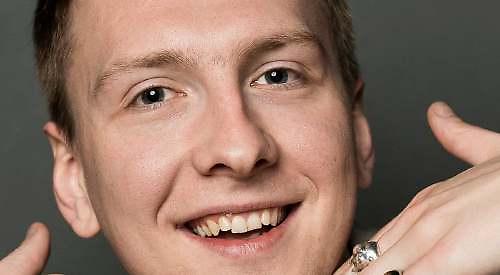 A GIRL who hosts a weekly podcast interviewing adults about their jobs was thrilled to “meet” a television star.

Gwen Rose quizzed comedian Joe Lycett, whom she had watched presenting the BBC’s The Great British Sewing Bee, during an hour-long virtual chat for her show, Gwen Gets To Work.

The seven-year-old, who lives in Caversham, has recorded more than 30 episodes, which are released on most Mondays.

Friends and relatives have streamed or downloaded it thousands of times since she launched it as a way of keeping busy during last year’s first coronavirus lockdown.

Her chat with Lycett was organised by a mutual friend of her mother Emily Smeaton. He talked about the challenges of continuing to work during the covid-19 outbreak and the pair bonded over their love of fake fur jackets.

Gwen asked if he had considered competing on Strictly Come Dancing after a recent guest appearance but he said he didn’t like the thought of dancing in front of others and joked that the terms and conditions put him off.

He admitted to getting nervous before performances but said: “It’s a good thing because it shows that you care about what you’re doing.”

Ms Smeaton, who runs the Hypergallery art gallery in Market Place, Henley, said: “He must have been very busy filming as he was all over the telly during the festive season but he replied very quickly agreeing to do it.

“He told us he loved the idea and was really good with her. They had a really good yarn and he showed us his Christmas tree, which was fun. She told him that she loves his jokes and wasn’t particularly nervous.

“She enjoyed it loads because he was such a nice guy. It’s probably more nerve-wracking to interview someone you know very little about, though she does her research and is getting more confident.”

Gwen’s chat with Her Excellency Ms Weekes was arranged by her stepfather Kwesi Clement, a music producer who hails from the island and who edits Gwen’s interviews.

They discussed Trinidad and Tobago’s culture and traditions, including its dances, and what it is like living near the sea.

Ms Smeaton said: “The president was really lovely and I’m sure it was good publicity for her country.

“It was amazing to talk to someone of her status and from the other side of the world.”

Ms Smeaton said: “She got a real buzz from talking to someone who was so enthusiastic about their job. He was really excited to explain the basic ideas, like the fact that a car’s braking power is more important than its speed, though some aspects went over her head.”

When interviewing her headteacher, Gwen asked her if she had a secret stash of wine in her office “like Mummy does”. Mrs Edwards replied “no”.

Asked what other careers she might have pursued, she said she had considered becoming a stuntwoman but then remembered she was afraid of heights.

“That got Gwen a bit of kudos with her classmates because the headteacher is a god-like figure to them,” said Ms Smeaton.

“She’s really proud of everything she hs done since this started and there was one episode where she got her friends to ask the questions, so it has been a good way of building relationships in a challenging year.

“Gwen has enjoyed learning about all these exciting jobs and it has given her a sense of what’s out there.

“I think she’s most interested in reporting or teaching as a career. She loves that process of talking to people from all walks of life and it gives her a real sense of accomplishment.”

To listen to the podcasts, visit https://link.chtbl.com/NdiUrRGS