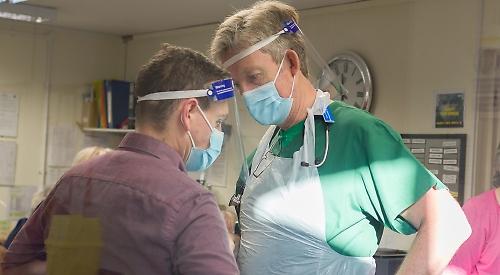 CORONAVIRUS vaccinations are now being given to residents in the Henley area aged between 75 and 79.

The town’s Hart and Bell surgeries, off York Road, have administered the first of two jabs to almost every patient aged over 80, including those who are housebound or living in a care home.

The practices have also had an “overwhelming” response from frontline health and social care workers, another of the highest priority groups, and those aged over 75.

Now they are contacting patients aged over 70, who are next in the queue under the government guidelines along with the “medically extremely vulnerable”.

Most will get the Oxford-AstraZeneca jab, which was approved for use in the UK on December 30 and, unlike the earlier Pfizer-BioNTech vaccine, doesn’t need to be stored at -70C.

Health authorities have enough doses of the newer treatment to cover 50 million of the nation’s 66 million inhabitants.

Both vaccines are given in two doses up to 12 weeks apart and the length of the wait depends on how quickly the NHS can supply it.

The first patients in Henley got the Pfizer treatment when it was trialled shortly before Christmas and received their follow-ups a few weeks later.

Those who receive it must be supervised for 15 minutes to ensure there are no side effects while those receiving the Oxford jab may leave immediately.

Dr Shellani Knight, a partner, said: “Staff have been absolutely amazing and have stepped up to the challenge, working longer hours and extra days to ensure patients are offered the vaccine as quickly as possible.

“We initially sent text messages to patients but more recently staff have been calling to invite them in, which has been relatively straightforward. They’ve been fantastic at following our social distancing guidance so the service has been running very smoothly with little delay.

“We encourage people to be vaccinated so that everyone can return to normal as quickly as possible. We still have a long way to go but this has given a glimmer of hope.”

She said the surgery had received “wonderful” feedback about its clinics, which are being run with the help of volunteer marshals.

One patient said the service was “friendly and very efficient” and “smooth and trouble-free”. The Hart Surgery has now given a first dose to more than 1,500 patients but is still trying to contact a small number of over-80s who may not have been answering their phones.

Dr Will Hearsey, a partner, said: “The Oxford vaccine makes it easier because you don’t have to wait afterwards and we can be far more ‘quick fire’. The process becomes automatic after a while and it’s not too different from our regular flu clinics but the one-way system and social distancing remain important.

“Deliveries often happen at short notice, which is hard but that’s why patients often get a phone call only a few days beforehand. It’s very much a day-by-day thing, which is difficult logistically but it becomes more manageable over time.

“It feels like we’re turning a corner even if we haven’t turned it completely. We’re going to be doing this for the foreseeable future so we’ve got to get familiar with it. There’s still a long way to go and everyone should keep up the precautionary measures.”

Patients left dozens of comments of praise on both practices’ Facebook pages.

One said: “You are doing a great job in hard times and with directives changing constantly.”

Sonning Common Health Centre and Nettlebed Surgery, which are part of the same practice network, can now give the Oxford vaccine on site because it is easier to transport and store.

The practice in Wood Lane has now vaccinated 1,675 people, including care home residents and staff and almost all patients aged over 75. Those aged over 70 or who are clinically vulnerable are now being contacted.

Practice manager John Lisiewicz said it was hoped to vaccinate everyone in the high-priority groups within the next two weeks or so but this would depend on supplies.

Goring and Woodcote’s joint medical practice has given more than 1,275 initial doses to the highest priority groups.

The practice has also vaccinated more than half of its over-75s, who are receiving the jab under gazebos in its two car parks. It is now contacting the over-70s.

Executive partner Dr Simon Morris said: “Being outside makes it so much easier and faster. Everyone stays on their feet and we just keep moving so it’s like a military operation.

“It has been a phenomenal effort and I’m really pleased. We’ve had some really moving feedback from patients who haven’t been out all year and see this as a light at the end of the tunnel.”

He said hundreds of patients got the first Pfizer jab before Christmas and were expecting another three weeks later, as happened in Henley, but this was postponed at a week’s notice because supplies were diverted to other surgeries giving their first doses.

The follow-up will be given within 12 weeks and health bosses say it will remain as effective. They say they had to cover as many people as possible and will give a new date as soon as they can.

Dr Morris said: “The short notice was shambolic and frankly unfair to patients and practices which had to call hundreds of people. We had to cancel 400 visits and that takes hours and hours — you’ve pretty much got to stop everything else.

“We were lucky to get a week as some surgeries only got two days. It’s not nice to call even one person saying they can’t have their next dose so to do that hundreds of times is a big ask of our reception team.” He said the vaccination rate should increase as younger age groups join because they are more likely to have their phones on at all times, so can be reached more quickly.

Wargrave Surgery has also covered most over-80s and is moving to the next age groups.

Dr Jim Kennedy said the surgery in Victoria Road, which was among the first in Britain to go into nursing homes, could move some clinics to the village’s old fire station to free up its premises for routine appointments.

It has vaccinated patients as old as 103 and can cover up to 150 per hour using the Oxford jab.

Dr Kennedy said: “[The NHS] are ramping up deliveries at a rate of knots but it’s still not as predictable as we’d like and it’s still a ‘push’ model where you get what you’re given.

“We’re finding smarter ways of doing things and have a text-based system that we will use for our younger cohorts. It should get easier over time and we’re putting it out as fast as we get it but supply is the issue.

“The system is very familiar for anyone who’s had a flu jab and is almost as quick. We limit the amount of time that people spend in the building and aim to have people in and out again in five or six minutes.

“We don’t want people turning up too early but I think the local population understands that.

“The people of Wargrave have grabbed this with both hands. Our vaccination rate is above 95 per cent, which is phenomenal, and it looks like there’s an equal appetite among the younger age groups.

“The staff have been outstanding and shown a huge amount of inventiveness and adaptability.”

The Boathouse surgery in Pangbourne, which serves Whitchurch, has almost vaccinated all over-75s apart from a small number who haven’t responded to invitations.

It is now contacting those who are “clinically extremely vulnerable”, the next priority group, with the over-70s to follow as soon as supplies allow.

The remaining groups are, in order of priority: over-65s, all adults with certain physical or mental conditions, over-60s, over-55s, over-50s and the general population.

There are plans for a larger vaccination “hub” in Oxfordshire which could speed up the process but more information has not yet been revealed.

All patients should wait to be contacted and not call their surgeries to avoid putting unnecessary pressure on staff. Even after vaccination, people should continue observing social distancing, covering their faces and regularly washing their hands.