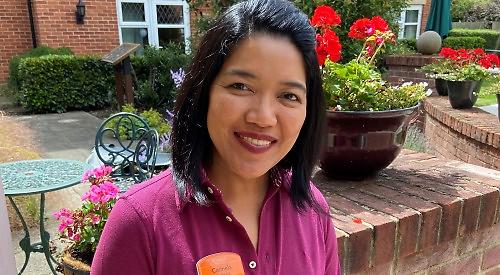 MOST residents and staff at care homes in the Henley area have now received their first dose of the coronavirus vaccine.

They will have a follow-up injection in early spring and the elderly residents can then look forward to being allowed to see their families in person again, having been in lockdown since March.

Residents at the Henley Manor Care Home in Mill Lane, which is run by the Hallmark group, received their jabs in December when the Pfizer vaccine was the only one available. These were administered by a team from the Hart Surgery.

Ellie Faramarzian, the home’s general manager, said: “We would like to thank the Hart Surgery, who co-ordinated the vaccinations smoothly and ensured everyone was vaccinated safely and as soon as
possible.  Our absolute priority is to keep everyone safe and we are optimistic that the vaccine represents the start of a return to more normal times.

“We continue to follow robust infection control measures to keep everyone safe and are doing everything in our power to keep residents occupied and entertained during the latest lockdown.”

All the residents and staff were provided with information and leaflets about the vaccine before they received it.

At the Chilterns Court care centre in York Road, Henley, 47 of the 51 residents have had a jab.

Ivana Pavolova, area operation manager, said: “We made sure that we registered colleagues and residents for vaccinations as soon as we possibly could because we recognise that this is one path forward in overcoming the pandemic.

“My colleagues have shown incredible dedication and skill in the last nine months in the face of this unprecedented challenge and I must thank them, our residents and their families for pulling together.”

The centre is part of the Orders of St John Care Trust.

Tower House in Lower Shiplake has 11 residents and 11 staff, who all received their vaccination on New Year’s Eve.

Owner Bridget Kidd, who runs the home with her daughter Sinead, said: “Vaccination day was like a dream come true for us.

“The residents and staff were very grateful to the Hart and the Bell Surgeries for administering them.

“We are looking forward to having our second vaccination so they can see their loved ones and hug them.

“We still need to be on our guard —  we’ve managed to keep the virus out of the home by sticking to the government guidance and we went into a lockdown quite early.”

The Sunrise of Sonning care home, which has 70 residents, had its first set of vaccinations for staff on December 17 while the first jab received by a resident was on Christmas Eve.

These were administered by Dr Jim Kennedy, from Wargrave Surgery.

Around half of the staff and residents received the Pfizer vaccine but more recently the Oxford/AstraZeneca one has been used due to its increasing availability.

All but two of the residents have been vaccinated so far. About 100 of the 136 staff have had the jab but some are shielding or on maternity leave, so have not been on site.

General manager Carmela Magbitang said: “Wargrave Surgery has been very helpful and accommodating. Any team members and residents who were unable to receive the vaccine on the days the GP team visited the care home have been able to arrange to receive it separately.

“We are pleased to have received our first dose and look forward to receiving the second in due course.”

Resident Doreen Maddock said: “I was thrilled to have had my vaccine. It was a weight off my shoulders.”

• On Wednesday, Health Secretary Matt Hancock announced that 10 million people across the UK had now been vaccinated.