Theatre is my life and home, says new manager of Kenton 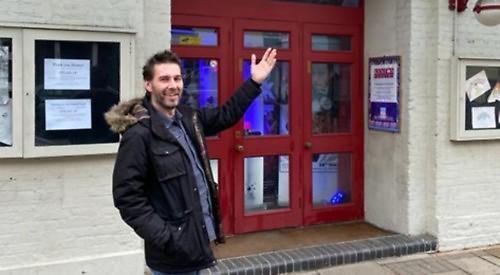 THE new manager of the Kenton Theatre in Henley says the venue is his home away from home.

Simon Spearing, 47, started in the role this week following a four-month recruitment process by the trustees of the New Street venue, which has been closed since March due to the coronavirus pandemic.

The Kenton has been without a manager since March last year when the previous manager, Max Lewendel, left after just eight months.

Mr Spearing, who lives in Winchester, was made redundant from his role at the town’s Theatre Royal in November as a result of the coronavirus pandemic and says he feels lucky to have found his new job.

He said: “There will be challenges but I’ve spent most of my life in theatres and seeing venues all around the country being closed is so sad.

“The Kenton Theatre is my home away from home and I am working towards making it safe to re-open. It’s a lovely building but it can’t do what it needs to do without people in there — theatres need people.”

Mr Spearing said he “stumbled” into theatre after working with Zip Theatre in Wolverhampton, where he was born and raised. He used to help  build stage sets. “I absolutely loved it and that’s what I’ve been doing ever since,” he said. “I would much rather be backstage than on it.”

He became a freelance production manager and toured the UK with a number of theatre companies.

Mr Spearing said: “I toured with the Rat Pack tribute show in the late Nineties. I wasn’t really a fan of the music but after working on the tour and listening to it for months and months, I began to love it.”

Despite this, he said he didn’t want to spend his life “in the back of the truck every day” and decided to buy a pub, the Red Deer in Sheffield, which he ran for about nine years.

“It was fun and a lot of hard work but I really missed the theatre,” said Spearing.

“What really did it for me was the thought that when you go to the theatre, you can put your bags and coat down on the seat and then at the interval have a wander and a drink and leave your bags there.

“I can’t think of any other place you can do that and feel that secure and safe. You don’t do that at a pub. Theatres are just safe places and if I do one thing in my life I hope it’s to make people feel safe in the theatre.”

Mr Spearing has worked at a number of theatres, including the Kings Theatre in Portsmouth and Camberley Theatre.

He was made redundant from the Theatre Royal in Winchester having been furloughed since the first lockown was introduced in March.

He said: “I don’t think anyone considered how bad covid-19 would be — at the time we were planning for disruption across three months, six at the most.

“Redundancy was necessary. It’s a hard process to go through, whether you were made redundant or the one that made that decision.

“But I do like to think these things happen for a reason — I was made redundant at a time when the Kenton was advertising their role, so it was like it was meant to be. I’ve been incredibly lucky.”

Mr Spearing, who has two children, Ruben, eight, and Penelope, 10, is working from home while the theatre remains closed and hopes to move to Henley in the near future.

He is responsible for the everyday running of the Kenton, which is the fourth oldest working theatre in the country, as well as helping with the programming, the box office, technological aspects and welcoming audiences.

He said: “The joys of having a role like this is that every day is different. Mostly, I’ll be welcoming people and making sure they are safe — that’s what I love to do.

“We do need to sit down sometimes and go through spreadsheets but I’m not someone who can just sit in the office all the time,  I need to speak to the audience and the team and figure out what it is that makes people come and see a certain show.

“The worst thing a place can do is find a winning formula and then just stick to that as people need things to change in some ways — restaurants don’t provide the same menu for 10 years.”

It is not known when the theatre will be operational again. After a coronavirus risk assessment in October, the trustees were told it could re-open with a reduced capacity of 66 seats out of 240 in order to observe social distancing but they didn’t think this would be viable or sensible.

Mr Spearing said he wanted people to feel confident when they returned to the theatre.

He said: “Normally in these circumstances we would be thinking of development plans and how to improve the way the theatre operates but at the moment we just need to re-open and do it safely. We need to communicate with the public and with the staff to make sure that people have the confidence to come back again.

“There’s a longing to return to things we used to enjoy — we all desperately want it back but we do need to know that we are safe.

“That’s my plans for the next few weeks. After that the next two years will be difficult for all businesses as we will be recovering.

“It’s a great opportunity to look at how we do things and how we can change things.”

Julie Huntington, who chairs the theatre’s trustees, said Mr Spearing beat a strong field of more than 30 candidates and was “exactly what the theatre needs”.

She added: “He is highly qualified in all areas of theatre, from dealing with difficult customers to climbing ladders and sorting out lighting.

“We had very high calibre applicants for the position, so whittling them down to five, then to two, was extremely difficult.

“However, Simon kept coming out on top of all our deliberations in all aspects of the job and in the end he was a unanimous choice for the trustees.

“We feel that we have placed our precious theatre in a very safe pair of hands.”