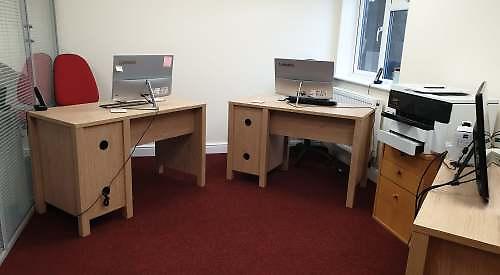 THE Fish volunteer centre in Sonning Common has relocated after almost two years of planning.

The charity has moved from Kennylands Road to the old police station in Lea Road after raising £150,000 to pay for it.

The move was delayed twice due to heavy rain in November and the third national lockdown that began last month.

Clive Mills, the former Fish chairman, who oversaw the process, said: “I’m really pleased that we’ve been able to move at long last as it has been a long time coming.

“It was a big, big team effort and it just shows the strength of our charity and the great work that has happened over the last 43 years. Many great people have come through this organisation.”

Mr Mills said he had two objectives when he was chairman. One was to move the charity into the 21st century by getting new computers.

The other was to find a permanent home for the charity instead of continuing to rent rooms at Springhill, the home of former village GP Dr Peter Hemphill.

He said: “The reason for wanting to move was because we wanted to take care of the future of Fish.

“We were very happy at Springhill and we understood we were more than welcome to stay there but in the future the family might have wanted to sell the property.”

The old police station was closed by Thames Valley Police in 2017 to save money. It was put up for sale about 18 months ago and the charity put in an offer to buy the property.

This was declined but Mr Mills found the company which bought it, EXP Property, and pleaded the charity’s case.

He said: “EXP Property were supportive of the charity and after much debate we agreed a price for them to sell to us and they priced up the external works for us as well.

“Once we had an idea of how much it would cost we started to campaign to raise the funds.”

The money was raised through a “buy a brick” appeal, a donation from the Mulberry Trust, a grant from South Oxfordshire District Council and the charity’s own reserves.

Mr Mills said: “The money was raised from some very, very generous supporters of the charity, the parish councils in the area and South Oxfordshire District Council — we shouldn’t underestimate the support.

“With all the money we were able to sign a contract with the developers.”

Northgate Developments began transforming the property in October last year by gutting the inside, building a new rear wall and replacing the roof.

Fish plans to show the new facilities to the community as soon as the coronavirus restrictions allow.

Mr Mills said: “We will carry on our work as normal and we wish to welcome the community to the new home as soon as we can.

“We have a new community room where we usually have a foot practitioner come in and carry out appointments and we have carer groups during the afternoons.

“We would like to organise some jigsaw afternoons as well and maybe a knit and natter session.

“We have a brilliant new kitchen area which can cater for everyone.”

Mr Mills said he was grateful for all the support from the community and the businesses which offered their services free or at a discounted rate.

He singled out Gary Buckett, who runs a removal company in Sonning Common, Simon Cole, of Northgate Developments, and Jack Jiggens, of EXP Property.

With the project completed, the charity is already looking at work it can take on next.

Mr Mills said: “We are looking at finding a shed or a barn which could be set up for pottery workshops or fixing furniture.

“People could just come for a cup of tea and chat — that will be our next project.”

The other properties on the site, including the old police house and two garages, are still being renovated by EXP Property.

Mr Mills said he expected these to be on the market by March.

Fish (Friendship In Sickness and Health) has continued some of its services throughout the pandemic such as taking people to the shops, the doctor and hospital or picking up and delivering prescriptions and shopping for people who are vulnerable or shielding.