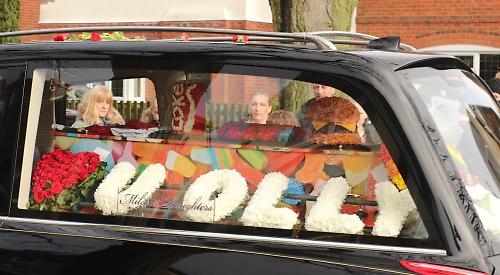 MORE than 100 mourners lined a street in Caversham to pay their last respects to a teenage boy who died last month.

The funeral of 13-year-old Oliver Stephens, who was stabbed at Bugs Bottom in Emmer Green on January 3, was held at Reading Crematorium this morning.

Friends, relatives and well-wishers gathered in socially distanced groups on All Hallows Road as his cortege made its way towards the crematorium's south chapel.

It slowed down as it turned into the street so that everyone could place a single red rose, which was the youngster's favourite colour, on the bonnet of the hearse.

Oliver's coffin, which was decorated with images of sweets, was accompanied by the message “Love U Olly XX” in red and white roses with a heart standing for “love”.

The hearse was accompanied by a motorcycle rider, three youngsters who rode alongside it on bicycles while performing wheelies and a number of cars following.

Only a small number of friends and family were allowed inside the chapel because of covid-19 regulations but everyone else was allowed to stand outside and listen over a public address system.

The service included a reading by Oliver's father Stuart, who said: “Please remember Olly as a loving, caring, funny soul who would stick up for the underdog, who would never back down from injustice, prejudice, inequality or cruelty. We will - God bless you, son.

“Be a wolf and not a sheep, float like a butterfly, sting like a bee, fly so very high.”

• A 13-year-old girl and two boys, aged 13 and 14, have been charged with murder and conspiracy to commit grievous bodily harm in connection with the incident while the girl also stands accused of perverting the course of justice.

They have been remanded in youth custody with a provisional trial date set for June 21.