Residents of private road warn people to keep out 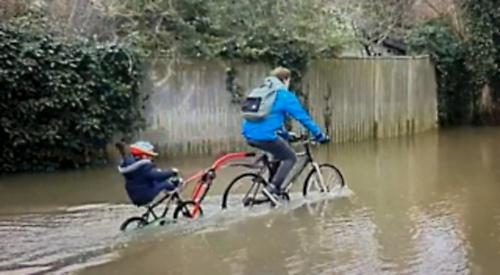 A BOAT dealer has defended his decision to install signs on a private road in Wargrave to deter trespassers.

He runs Bushnell Marine Services, which is the sales and repair section of the family business based at Thameside Marina in Watermans Way.

Two red and white notices have been placed at the end of the street saying that it is only open to residents of Loddon Drive and their visitors and there is no access to walkers, joggers and cyclists.

They also point out that there is CCTV in operation and warn of a maximum £5,000 fine for anyone who breaches the rules.

The signs have been put up as there has been an increase in people using the street for exercise since the first coronavirus lockdown began last March.

Mr Bushnell said: “Because of lockdown, more and more people have been cycling and jogging and they don’t move out of the way.

“There are a lot of older residents on the drive and the road is only 3m wide maximum.

“The amount of abuse that some of the residents have had to put up with is disgusting — it is amazing how some people have behaved. We are entitled to do this as it is our land. We’re different to everyone else because that bit of road is owned by a company. We are liable for anybody trespassing and we have to have insurance.

“All these people that are walking drop so much litter. I’ve already taken two bags of rubbish away and I need to do it again because there’s just so much of it.

“They drop their coffee cups, coke cans and crisp packets and it’s disgusting. There are also dog poo bags all over the place.”

In 2013, the residents won a case against the Ramblers Association at the High Court, which ruled Loddon Drive was a private road.

Mr Bushnell said: “As a company, my father [John] and I have to look at the bigger picture of insurance.

“I can’t give people a right of way because I would then be breaking that court ruling.

“I can’t change the fact that it’s a private road and that people who don’t live there aren’t allowed to go on it — it’s the law of the land.

“We could have been quiet and just let things go but they’ve caused the problem for themselves, I’m afraid.”

Some residents have distanced themselves from the signs on social media, saying they do not want to alienate the rest of the village. Suzanne Pacifico-Ahlgren said: “It is disgraceful. Please know that there are many residents on the drive who are adamantly opposed to these types of signs to discourage our neighbours to use the drive responsibly.

“Unfortunately, this particular section of the drive is not under our control.”

Sarah Pomeranz said: “I echo these comments as a fellow Loddon Drive resident and find the signs quite offensive.

“I can attest it was done without any consultation with those of us most affected.”

In October, Ian May, former chairman of the Loddon Drive residents’ association, appealed for the public to stop using the road for their daily exercise.

He said most people behaved responsibly but some came from great distances and some cyclists rode too fast.

Mr May said: “Loddon Drive is a private road, maintained at the expense of the residents, and there is no public right of way from Wargrave station along the drive for any form of traffic, whether on foot or by vehicle.

“We would like to return Loddon Drive to its private, tranquil and quiet nature. Please do not use it as a jogging or cycling route.”

Last summer, a farmer who lives at the opposite end to where the notices are, put up his own signs following some vandalism and rubbish being left on his land and by the river.

In June, residents called the police after about 100 teenagers were caught trespassing on the farmer’s fields in order to go swimming in the River Loddon.

Police dispersed the group after catching the youngsters lighting fires and drinking.

There were also cars parked along the road and on one occasion an ambulance was unable to reach a resident’s home.

Mr Bushnell added: “Some of the residents asked me if I could put signs up to match the ones the farmer put in at the other end.

“We had all the kids having raves and parties in the field and the signs were put in because it was disrupting his business. The police came and broke it all up.

“We all bought into Loddon Drive and we know there are negative aspects with the flooding but we also have the joys of a lovely quiet rural lane, which is now broken up by dog walkers, joggers, cyclists and ramblers.

“We do a lot for the community as a business. We support the local church, we’ve always supported the RNLI and help financially with the Wargrave and Shiplake Regatta.

“We own the road to Wargrave Boating Club but we don’t any problems with them.”