Village pond cleaned out for first time in 20 years 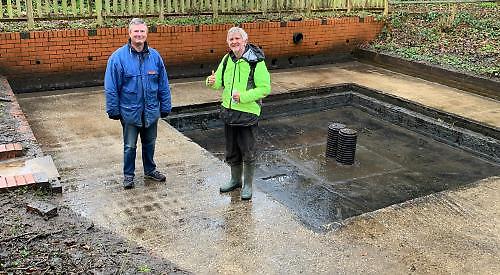 THE pond in Tokers Green has been properly cleaned for the first time in more than 20 years.

The beauty spot, which is located at the junction of Tokers Green Lane and Dysonwood Lane, was built in the millennium as part of a project to clean up the area.

However, the pond had filled up with silt and debris and needed to be drained.

Residents clean it by hand every two or three years but didn’t have the money to hire a contractor to drain the pond to clean it properly.

Then last week, Kidmore End Parish Council hired Hydro Cleansing, a liquid waste removal company, to drain the pond at a cost of £3,500.

This was after Councillor Andrew Harland raised the issue when he joined the council in September 2019 and made it his priority.

He said: “Tokers Green is at the southern end of the county and is thought of as part of Reading, so we feel a little forgotten.  The pond helps give us a sense of focus in our rural community. We have no shops or churches or even a hall for events — we have to hire marquees, which is always expensive.

“Furthermore, covid-19 has made Tokers Green the first point of call for a lot of walkers and cyclists from Reading so we wanted to make it a nice place for them to visit.

“We wanted to bring it to attention that we are part of the whole Oxfordshire scene.”

The pond was built in 2000 as part of a project to make the area  a beauty spot.

Ian Beale, who has lived in the village for more than 20 years, took the lead on the pond project.

He said: “It used to be a real eyesore where people would dump their rubbish, so we decided we would refurbish it and make it a beauty spot.

“It was a real community effort to raise the funds and build the pond — it probably cost £45,000 altogether but some of that was goods and services in kind.

“We had bricks donated and people did work for us free as well — it was a village-wide effort.”

Mr Beale said the pond clean-up has reinvigorated debates about the beauty spot and villagers were discussing what else could be improved.

He said: “We are having virtual discussions in the hope of getting a democratic agreement to make the area more attractive.

Mr Beale said pond the clean-up wouldn’t have been possible without Cllr Harland joining the council and making it his priority.

“It has been a slow process but it was progressed by Andrew becoming a councillor,” he said.

“He had this clean-up as a personal goal and got the funds and found a contractor to do the work.”

Andrew Heffer, who has lived in the area for 25 years and has helped clean the pond by hand since it was first made.

He said: “We had to dig it out with buckets and spades every two to three years.

“There were normally about 10 to 12 of us each time and it was always an enjoyable experience.

“There is still a lot of work to make it a beauty spot. We want a lot of light in there so we need to keep an eye on overhanging tree branches.

“We might add some benches in as well and some residents in the past have gone down and very kindly planted some spring bulbs.”