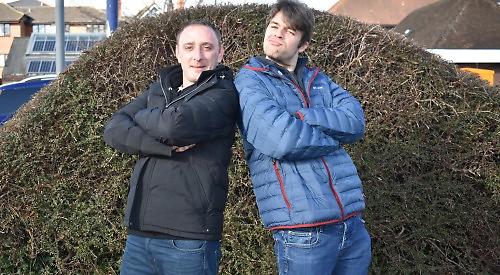 A CARER from Watlington is taking part in a danceathon to cheer people up during the coronavirus lockdown.

Dave Coombes, 38, has organised Join the Dance, One Love United and wants others to join him in dancing for 14 minutes at 2pm on Sunday, Valentine’s Day.

The idea followed an impromptu solo street dance he did to try to cheer up his friend Dan, whom he looks after.

Dan, 31, has a brain injury and Mr Coombes is his private carer who has been trying to come up with new ways to keep his spirits up during the covid crisis.

Mr Coombes said: “The pandemic has taken everything away from him — the football he used to watch and the day centres he used to go to.

“People with learning difficulties and autism work with routines. Dan was doing so well but then, a few weeks ago, his mental health took a bit of a dive.

“To cheer him up I blasted a tune from the car and I got out and danced on the street near where he lives.

“I saw people laughing and taking the mickey but I didn’t mind as it had been a long time since I had heard anyone laugh.”

As he was going home that night he received a call from a friend to say that her 12-year-old was having a tough time.

Mr Coombes said: “The pandemic is affecting everyone’s mental health, particularly children, and by the time I got home the idea was born — to come up with a fun event that would give everyone something to look forward to.”

Since then he has been posting dance videos of himself and Dan on social media every day to encourage others to take part.

Mr Coombes, who used to be a builder, said: “Dan has been my main priority and I have had to be careful how I approach it.

“If we learned a dance routine and he got it wrong when we filmed it, he would be in a mood.

“Our routine involves getting a coffee in the morning on the way to where we are going to dance, which is generally near to where he lives, and then we go and get some lunch.

“It’s great to be able to give Dan a new routine like this. He’s such a great little dancer and he is absolutely loving it.

“When we did our first dance it was to Pharrell Williams’ Freedom in a park.

“When we turned up I could see some mums and thought, ‘I’d better go and warn them what we were going to do before they see two grown men start dancing’. They actually asked to join the group and then, as we were leaving, their kids said they really liked the dancing. That’s the kind of messages we are receiving.”

Mr Coombes has received numerous positive comments on Facebook and some people have uploaded their own dance videos to show support.

Dan has been described as a “walking miracle” to have lived as long as he has after being born with a rare brain tumour. He was 10 days old when he had to have an operation to remove part of his brain.

As a result, he didn’t learn how to talk until he was eight years old and he still receives care from Great Ormond Street Hospital in London.

Mr Coombes, who has cared for Dan for more than two-and-a-half years, said: “When I was 30 I had a few personal issues and I relocated to the Midlands to get away from everything.

“After a couple of years, I came back to this area and applied for 74 jobs. One of these was a carer’s job and they were the only ones that came back to me. I had the interview and after a few minutes they decided to offer me the job — it was just meant to be.

“I began looking after six adults in High Wycombe and was there for two-and-a-half years before I was contacted by Dan’s mum, who wanted me to help look after him.

“This lad brings joy to my life every single minute I work with him. I don’t see myself as his carer, I see him as a brother and best friend.”

For more information and to take part, visit the Dance, One Love United page on Facebook.