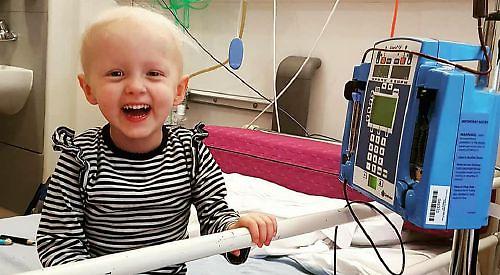 AN appeal to help a little girl with a rare and aggressive form of cancer has been scrapped because there is no hope of saving her life.

Elara Foxley, three, of Knappe Close in Henley, was given the all-clear after being treated for stage 4 neuroblastoma last summer but the disease has returned and this time it can’t be treated.

Her mother Nicky was aiming to raise £241,000 to take her abroad for an experimental therapy and the fund had almost reached the target in less than two weeks when it was halted on Wednesday.

Ms Foxley stopped accepting pledges after doctors at the John Radcliffe Hospital in Oxford confirmed that her daughter is gravely ill and they can only keep her comfortable in her remaining days. Elara went back to hospital a fortnight ago after experiencing pain in her hip and difficulty walking.

Tests showed the cancer, which was originally in her abdomen, had spread to her brain and spine.

She underwent a six-hour operation on Friday in which surgeons took a tissue sample to determine the full extent of her relapse.

This appeared to go well and her mother said she was “her happy, jolly self” immediately afterwards.

However, a few days later her legs became paralysed and an emergency MRI scan showed her tumours had doubled in size in just over a week.

Her chemotherapy has now been stopped in favour of palliative care.

Ms Foxley told her supporters online on Wednesday: “It breaks my heart to write this. Elara has taken a very bad turn… it’s just too aggressive.

“There is no longer anything that can be done for Elara. The chemo has stopped and they are making her as comfortable as possible. Thank you so, so much for everyone’s incredible support at this most devastating time. Donations have been turned off.”

Elara was diagnosed just before Christmas 2019, when her GP referred her to the John Radcliffe for a bruise that wouldn’t heal.

Blood tests showed a low platelet count so doctors examined her and found a growth in her abdomen and others in her bones.

The disease, which grows in tissue left over from foetal development, has few symptoms so is rarely detected at an early stage.

Elara was kept in for two months of chemotherapy which made her hair fall out but shrunk her tumour enough for a surgeon to remove it.

She then underwent high-dose chemotherapy which made her very sick but appeared to work.

Ms Foxley, a former administrator at Invesco in Henley, kept her daughter’s spirits up by telling her she was getting “super powers” to fight a “cheeky monster” in her tummy.

She told her that “naughty fairies” would borrow her hair before returning it better than ever. After getting the all-clear, Elara was prescribed precautionary radiotherapy and then immunotherapy, which she was still undergoing when her symptoms flared up again.

She returned to hospital where doctors confirmed the worst and started her on steroids for a swelling in her spine.

Ms Foxley learned about the experimental treatment through the charity Solving Kids’ Cancer, which was going to organise the trip.

The money raised would have paid for a treatment in which the immune system is trained to attack cancerous cells and would also have covered expenses such as travel.

Her appeal, which was featured on the front page of last week’s Henley Standard and on its website and social media pages, was shared more than 10,000 times and attracted about 7,200 donors through the GoFundMe platform.

Contributions ranged from £5 or £10 to anonymous offers of £5,000, £2,000, £1,000 or several hundred pounds. Donors left messages of support, saying they were parents or grandparents and sympathised with the family’s situation. Many said they were moved to tears when they read Elara’s story.

Valerie Harper said: “Having my own healthy grandchildren, it broke my heart reading about this wonderful little girl who is always smiling. I hope you get what you need for her. Lots of love xxxx.”

Bethany Overson said: “This story brought me to tears. Can’t even begin to imagine what you are going through. I hope this beautiful little girl gets the treatment she needs.”

Joanna Pearson said: “As a fellow mother to a young daughter, I simply can’t imagine the horror you are both enduring. Your strength is inspirational — you are both incredible.”

Supporters included Ms Foxley’s neighbour Tami Rooke, the manager of the Harris + Hoole coffee shop in Duke Street, Henley, who raised £1,150 by baking about 200 cakes at home and selling them in store over the weekend.

Mrs Rooke got to know the family when Elara was in hospital last summer as she baked her a cake themed around Disney’s The Little Mermaid to mark her third birthday.

She made a variety of cakes, including cupcakes topped with different types of confectionery, with ingredients given free of charge by the Tesco supermarket in Reading Road, Henley.

The Chocolate Café in Thames Side, Henley, also donated a batch of cakes and tray bakes.

Mrs Rooke spent three days making the first batch of 100 but these sold out within hours so she stayed up until the early hours of Sunday making 100 more.

Customers paid up to £30 a slice when they learned what the sale was in aid of. Mrs Rooke said the proceeds will still go towards supporting the family.

GoFundMe says it can refund donations when medical expenses campaigns are called off. Organisers may invite donors to give their money to charity, or other family expenses, instead.

The firm says it works with campaigners to identify the best way forward and stays in touch with supporters about any changes.