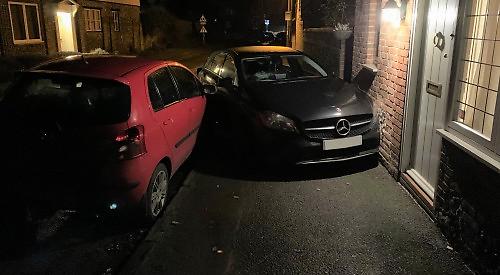 A WOMAN has lost three cars in five years after they were hit by other drivers while parked outside her house.

A Renault Clio belonging to Leslie Maynerd, who lives in Whitchurch high street with her husband David, was written off after being involved in a smash with three other vehicles at about 12.30am on February 7.

This followed the destruction of her Honda Jazz in similar circumstances in 2016, shortly after the couple moved to the village from Caversham, and a collision last year which claimed the Toyota Yaris she bought as a replacement.

The Toyota was also damaged in 2018 when a Mercedes which was parked next to it was struck in the rear by a passing van and shunted on to the pavement and became wedged between the Yaris and the Maynerds’ home.

In the latest incident, a BMW heading down the B481 from Whitchurch Hill ploughed into a parked Mini, shunting it into the rear of Mrs Maynerd’s Clio.

The BMW came to a stop on the other side of the road while the Mini was spun across the southbound lane and hit the Clio so hard that the boot caved in, the rear window was shattered and the passenger side brake and indicator lights popped out of their socket. The rear bumper was split along its width and the number plate cracked.

Mrs Maynerd’s car also slid forward into the boot of her husband’s Mercedes C220 but this caused only minor damage. The vehicles were parked in the layby opposite the Maynerds’ house, between the turn-offs to Manor Road and Eastfield Lane.

Mrs Meynerd’s other cars were damaged while parked in the street outside her front door, so she had assumed the layby would be safer.

The couple were in bed when they heard the crash but went back to sleep as they thought it was their dog downstairs making a noise.

They only got up to investigate when they saw flashing blue lights through their bedroom window. A neighbour had called 999.

The BMW driver was taken to hospital by ambulance and police closed the road in both directions. The Mini was towed away.

Mrs Maynerd, who was up until after 3am talking to police, said: “I didn’t realise my car was involved but then an officer shouted up, ‘If this one’s yours, you’d better get down here’. I nearly cried when I realised what had happened.

“It was devastating to go through that again, especially when you think you’ve parked somewhere safer and still end up being clobbered. I could wonder ‘why me?’ but I thank God it wasn’t worse. Nobody was hurt or killed and you can always replace a car. My insurers have already paid out and collected it and I’ve got a new one in mind.”

The 2016 crash happened when a car coming up the hill swerved to avoid a driver coming the other way and clipped the front driver’s side of Mrs Maynerd’s Honda, damaging the suspension beyond economical repair.

The culprit owned up but two weeks later the same thing happened to her courtesy car and the garage said it was a write-off. That driver didn’t stop.

Police attended the 2018 incident involving the Yaris and even located CCTV footage of the van but no number plate was visible.

Mrs Maynerd, a complementary therapist, said: “It’s a miracle there wasn’t more damage that time because the car was almost pushed through our front door. In the end, there was only a bit of damage to our flintwork.

“The police lost interest but you can’t blame them as they can’t do anything without evidence.” The Maynerds were away last year when the Toyota was written off, this time by a van ploughing into the boot. Witnesses claimed the driver had been talking on his mobile phone.

There have also been “countless” minor scrapes in which the couple’s wing mirrors were damaged or paintwork was scratched.

Mrs Maynerd said that efforts to prevent drivers speeding through Whitchurch had failed.

The parish council was going to ask Oxfordshire County Council, the highways authority, to consolidate parking into five designated zones and paint double yellow lines elsewhere but some villagers argued this would exacerbate speeding by clearing the way to drive faster.

The councils are now in talks about reducing the 30mph speed limit to 20mph and installing a pedestrian crossing and bollards at the southern end of the high street.

Mrs Maynerd said: “I’m convinced that people regularly do 40mph along here. The street is long and straight with good visibility so it’s easy to speed when there are no double-parked cars and you think you can easily get through.

“But when people drive too fast, there isn’t enough braking distance when they suddenly meet someone coming the other way. They have to swerve towards the pavement and often into a line of parked cars.

“It’s hard to know what’s the best approach but we’ve got to make people slow down somehow.

“I think speed humps could be one way forward.”

• A 15-year-old youth was arrested on suspicion of drink-driving and taking a vehicle without consent after the latest incident but was later de-arrested. Thames Valley Police say they are still investigating.