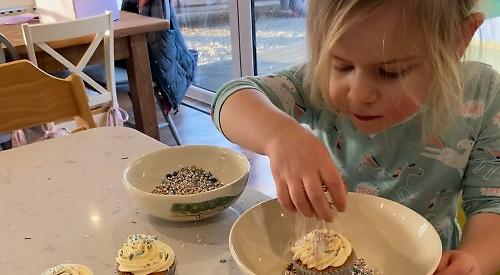 A FOUR-YEAR-OLD girl from Ewelme has raised more than £500 for NHS workers by making cupcakes.

Alice Stockings began baking in early January and selling her cakes to workers on her parents’ farm.

She set herself a target of raising £50 but in only three weeks she had made more than 10 times that.

All the money she made went to the Oxford Hospital Charity, a trust made up of four NHS hospitals in Oxfordshire.

Alice, who lives with her father John, mother Elizabeth and two-year old sister Emma, came up with the idea herself. She learned to bake with her mother when she was only two.

She made a poster to advertise her initiative at the farm and found the chocolate and vanilla cakes sold quickly.

Mrs Stockings, 37, who works in the farm office and owns a property business, said she was very proud of her daughter.

“For a four-year old it blows my mind,” she said. “She was making three to four batches of cupcakes a week throughout January and she did it all herself. I only helped her with the icing.

“It creates havoc in the kitchen but it has been absolutely brilliant.”

Alice, who has also been teaching her sister how to bake, didn’t put a price on the cupcakes but let people donate whatever they wanted.

Mrs Stockings said: “I think the lowest donation we got was £1 and one crazy person bought two cupcakes for £20.

“Alice tried to make her dad pay £60 for one of the cupcakes but she didn’t get very far!”

Alice also bakes jam tarts, rocky roads and flapjacks and, her mother says, is always looking for “any excuse to get out the wooden spoon”.

Inspired by her efforts, Alice’s school, Cranford House in Moulsford, challenged all the other pupils to take part in a cupcake fundraiser using redeemable vouchers to sell to families outside each household’s bubble.

The school has raised more than £2,000 in total, including Alice’s contribution.

Mrs Stockings said: “It’s really great the school took up Alice’s idea and they exceeded their target too.

“I’m really glad the money is going to the Oxfordshire Hospital Charity as I was born in the John Radcliffe Hospital and so was my husband.”

Alice’s efforts also caught the eye of Lottie Bedlow, a previous contestant of The Great British Bake Off and a former Cranford House pupil.

Lottie, now 31, came sixth in the 11th series of the Channel 4 competition and agreed to raffle 10 signed copies of The Great British Bake Off: Love to Bake 2020 to raise more money. She also sent a signed copy of the book to Alice with a message that read: “What a “star baker”.

Mrs Stockings said: “It was such a sweet thing for Lottie to have done. Alice is in love with the book. She’s very protective of it.”

Alice has stopped baking cupcakes for now but will take it up again when coronavirus restrictions allow families outside their household bubbles to meet so they can redeem their vouchers.

She said: “Keep baking for the NHS. The NHS are beating the coronavirus.”

Mrs Stockings said home-schooling was hard as she has to do it at the same time as entertaining Emma.

“We’ve been incorporating maths into the baking,” she said. “We use it when weighing out the ingredients.

“We’re lucky we live on a farm as it has been our playground but it can be difficult sometimes.”