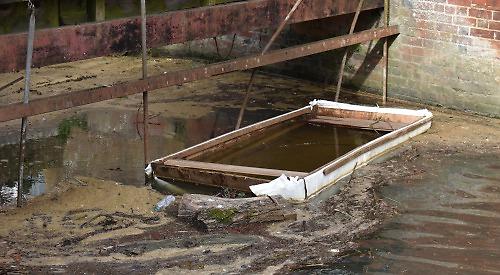 A HOMEMADE wooden boat has become stuck against one of the sluices in a communal garden in Wargrave Road, Henley.

The River Thames runs underneath the Marsh Mill flats through two water channels and one is now blocked with scum, branches and logs as a result of the boat being there.

Residents are appealing to the Environment Agency to remove the boat before the blockage causes a flood.

Enid Light, who has lived there for more than 35 years, said she first noticed the boat last week after the floods.

She said: “I didn’t do anything about it at first as the weather was still quite bad but reported it to Environment Agency.

“They haven’t got back to me. They are in charge of all rivers, so they have a lot to do but it’s a big department and it’s hard to get through to the right person.

“The boat is starting to cause issues as other things are coming down the river and backing up against it, such as branches and it will keep backing up until something is done about it.”

The boat, which is about 2m long and 1m wide, is lodged against the metal poles that hang down from the bridge over the sluice.

Mrs Light said it is common to find things blocked under the bridge and her neighbour usually removes them but the boat is too big.

She said: “Guy is in his nineties and he always keeping the sluices clear. It’s heartbreaking that he has put so much effort into clearing it and then this happens. If it’s left like that then Guy will give up clearing it altogether and the blockage will start to make the water rise.”

Residents believe the boat may have come loose from a moorning and floatbed downstream during the floods or that it was dumped.

Mrs Light said: “It’s a handmade boat and we’ve never had one of those before. People throw all sorts of stuff in the river — they use it as a dumping ground.”