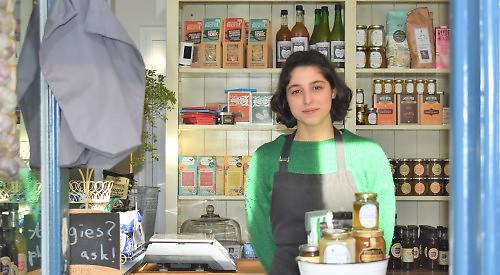 A NEW café run by a teenager has opened in Henley.

Geo Café has taken over the premises in Friday Street vacated by the Hot Gossip coffee shop when it moved to Reading Road last year.

It is an off-shoot of the Geo Café in Prospect Street, Caversham, which is run by Zezva and Keti Maglakelidze and sells Georgian food, bread and coffee.

The Henley café is run by their 19-year-old daughter Alexandra, who was unable to go to university due to the coronavirus pandemic.

Mrs Maglakelidze said: “As she has asthma she’s classed as vulnerable during the pandemic and she couldn’t go to university and she doesn’t know when she can go. So for her own wellbeing and for something for her to focus on, she will run the second store.

The Maglakelidzes, who have two other children, Lile, nine, and Cecily, eight, moved to Caversham from Georgia 20 years ago and opened their café in 2018 at the suggestion of a neighbour.

Mrs Maglakelidze, 46, said: “I used to have the window open when cooking and my neighbour would come over and say, ‘What is that? It smells so different’. The recipes we have are so unique to Georgia and she was encouraging us to start up a business. We started as a pop-up street trader in 2014 with only £200 as that was our budget and four years later we had opened the café in Prospect Street.”

The café now employs 14 people. Mrs Maglakelidze, who worked as a journalist in Georgia, taught herself to cook at home when they moved to Caversham to “connect” with her native country.

As well as the café, she started a second business, RG Bread, which operates from the café and offers deliveries of vegetable, fruit and bread boxes for those shielding during the pandemic. The café has been running a takeaway service since the first lockdown in March.

Mrs Maglakelidze said customers had been supportive, adding: “I can’t say how grateful we are.

“ I tried to give one woman some freebies as she is a regular customer but she said she couldn’t take anything free as she wanted to support us.

“People come and they don’t need everything that they buy but they want to help us so we can survive. Now we’ve been able to open a second store — the pandemic has really brought out the good things in people.”

The Friday Street café is open from Wednesday to Sunday.