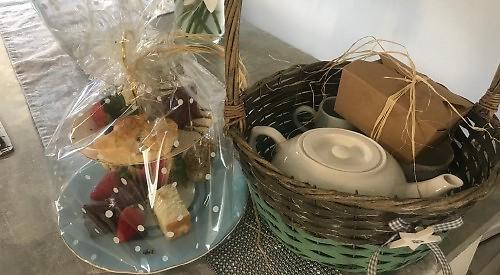 MOST people walking through Nettlebed high street will walk past this old public water pump without noticing it.

It’s located between the arts and crafts-style village hall of 1913, a brick and flint wall and the pavement, but is shielded by a large conifer tree which has grown to make it almost completely hidden.

Mains water was installed in the village in 1927. Mains drainage became available in 1961 when the sewerage treatment works built in the woods close by during the Second World War by US army engineers was eventually linked to the village.

Now the pump appears in a poor state of repair. It does not appear to have any information on when it was installed or by whom. Can any reader throw light on its origin?

DAWN JOHNSON has come a long way since she was a young mother cooking for her family.

Her children would call her gravy “Evian” after the water brand as it was so thin.

But after 30 years of teaching herself to cook and bake, she is not only accomplished but can also boast that her food is enjoyed by Aston Villa and England footballer Tyrone Mings, who is her son.

Now Mrs Johnson and her friend Zoe Rose have set up their own afternoon tea business.

Henley Hi Teas also offers hampers, picnics and “floral bouquets” with food rather than flowers. All the food is made in the kitchen of Mrs Johnson’s home in Binfield Heath and delivered with cake stands and china cups and saucers to provide a complete experience.

The women were set to launch the business in April but had to pull the plug after the country was plunged into its first lockdown.

Mrs Rose, 43, from Shiplake, said: “We were all set to start but then had to shelve the idea because of covid-19 and with the lockdown we weren’t able to do anything at all. At the start of this year Dawn and I spoke again and we thought that it was something we could now do and we both said we wanted to make a go of it.”

Mrs Rose, who has another daughter, Ava, three, with her husband David, a business studies teacher at Shiplake College, first came up with the idea.

She said: “I work part-time as paediatric nurse at the Royal Berkshire Hospital in Reading and wanted to have a little sideline and I have always thought of having a tearoom somewhere.

“I asked Dawn if she fancied doing something and she agreed.”

Mrs Rose is the “creative director” of the business and one of her favourite things is to make the floral bouquets, which could be strawberries arranged to look like roses or cold meats and cheeses with olives.

She said: “I love doing the sorts of things that put a smile on people’s faces. Dawn does the cooking and I am the one who makes them look pretty. We really complement each other.”

All the orders are taken online and the women deliver them.

Mrs Rose said: “We drop off our afternoon teas complete with china crockery and a cake stand and then we pick it all up from the doorstep the next day.

“It feels so nice to do something that gives people an experience and something to look forward to and enjoy compared with what’s going on in the world at the moment.”

Ms Johnson, 53, said she was glad to finally get the business up and running as she became bored during lockdown, especially as she wasn’t able to go and watch 27-year-old Tyrone play live.

She said: “I have a daughter who is a baker and she delivers brownies and her business exploded so we thought we would give it another go because Zoe and I work really well together.

“She is really clever in making things with fruit and making it look like something else.

“Everything is homemade and we hope that comes through in the flavours and textures that we produce. We do offer that sense of luxury. Lots of people are doing afternoon teas in standard boxes but for me, it should be more about the experience.”

Mrs Johnson opened a pop-up café in May 2018 with another friend, Lorrie Williams, at the Newtown business park in Henley but this closed in August 2019 as Mrs Williams had to quit for health reasons.

The pair had previously worked together for about two years at Church Street Baguettes in
Caversham.

Mrs Johnson said: “Everything I do now is self-taught but I also learned a lot from Lorrie, whose recipe I use for the shortbread in the afternoon tea.

“She has the ability to not measure anything — to shake out a bag of flour and sugar and add a couple of eggs and produce the most amazing cakes.

“My children haven’t tried my baking yet due to covid but Tyrone has asked me to bring with me an afternoon tea the next time I see him.”