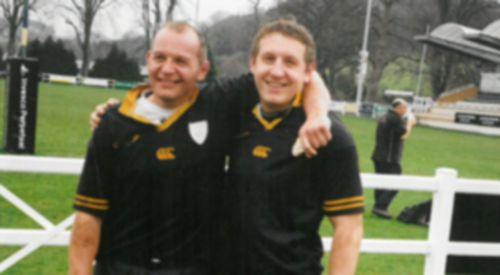 A FORMER Henley rugby player has launched a charity to help rugby players talk about their mental health.

Simon Trower started Brave Mind because he has suffered from poor mental health all his life.

He said: “Over the years I have taken medication and been treated by a clinical psychologist.

“This helped me on my personal mental health journey but it’s not until now that I feel like I’ve built the resilience and coping strategies to be able to come forward and openly talk about it.”

“At Brave Mind, it is all about action and putting mental health on the same level as physical health.”

Mr Trower, who lives in Maidenhead, played fly-half for Henley from the age of six to 26 but stopped playing rugby due to a back injury.

He came up with the idea for the charity after returning to the club to do some coaching.

He said: “A young player in his twenties was very open about his mental health in a positive way and it was very unusual in the rugby community to see that behaviour. Rugby is renowned for being masculine and I could feel that some people felt awkward.

Mr Trower, 42, a client services director, has now partnered with his former club to organise a pilot programme of online events with keynote speakers.

He hopes to go on to offer support to other clubs and schools across the country.

Mr Trower said: “The pilot is pivotal in what we do going forward and since the launch we’ve had four or five clubs approach us so we want to expand across the UK and Ireland.

“We would like to start fundraising for the charity as soon as covid-19 restrictions allow.”

Club chairman Chris Nixon said: “This is a ground-breaking initiative and we are delighted to be the first club to work closely with Brave Mind.

“Looking after our mental health has never been more important and we want everyone associated with Henley Rugby Club to know how seriously we take this issue. Help and support is there if people need it — please don't suffer in silence.”