Man fined £150 for driving into river 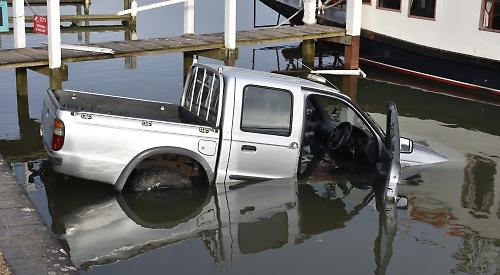 A MAN who drove a pick-up truck into the River Thames in Henley has been fined and disqualified.

Darren Baker struck a lamppost, went through two concrete bollards on the pavement and plunged into the water where his Ford Ranger ended up partially submerged.

He was helped out of the vehicle by Richard Schäfer, who was walking along Thames Side by the Hobbs of Henley moorings when the incident happened at 10.26am on January 7.

Baker was lifted to safety by Hobbs staff who gave him a change of clothes and a hot drink in their office.

Police tested him for drugs at the scene and found traces of cocaine in his system, Oxford Magistrates Court heard on Tuesday.

Baker, 50, of Millington Road, Wallingford, admitted refusing to give a urine sample on unreasonable grounds and was fined £150 and disqualified from driving for 12 months.

The court heard that he was a recovering drug addict but Baker told police that he hadn’t taken drugs for up to three or four days before the incident.

Liz Tweed, prosecuting, said: “He bounced off the lamppost, went through two concrete bollards across a public path and went into the river and was partially submerged in the water.

“The vehicle didn’t go directly into the river due to a pontoon belonging to Hobbs of Henley and the driver was helped out of the driver side by a member of public.”

Firefighters cordoned off part of the pathway, which was strewn with debris. Police arranged for the vehicle to be recovered.

Ms Tweed said: “Preliminary tests were done by police officers on site and no alcohol was found in his system but there were traces of cocaine.”

Baker was taken to Abingdon police station where he agreed o provide a blood sample but the nurse couldn’t find a suitable vein.

Ms Tweed said: “The officer changed the recommendation to a urine sample and Mr Baker agreed but when he saw the officer with the cup he said to just prosecute him instead. He was cautioned and charged for refusing to provide a sample.”

Nadine Colyer, mitigating, said Baker had failed to provide a sample as he was refused privacy.

She said: “He was going to provide a sample and he was happy to do so. Mr Baker thought he could turn around for some dignity and privacy. However, the officer has to hold the cup when the defendant provides the sample. So you will appreciate that Mr Baker was upset. He wasn’t trying to deliberately refuse.” Miss Colyer said Baker was addicted to heroin and cocaine and was currently receiving 80mg of methadone per day. He hoped to go into residential rehabilitation.

Baker was also ordered to pay £85 costs and a £44 victim surcharge. Robert De Gale, the presiding magistrate, told him he had been very lucky and the crash could have been much worse.

“The failure to provide a sample is what we’re dealing with and you pleaded guilty and you get credit for that,” he said. “We wish you luck and stay away from the wheel for the next year.” The bollards, which have still not been replaced, were installed by Oxfordshire County Council a year ago.

Former mayor Pam Phillips raised the issue of pedestrian safety with the town council, saying she was concerned that lives were being put at risk. She said that vehicles parked on the stretch of pavement where the posts had been were so close to the river that it forced people in wheelchairs or with prams to walk in the road.