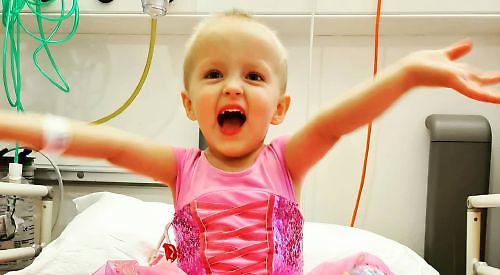 A LITTLE girl from Henley who was being treated for a rare and aggressive form of cancer has died.

Supporters had pledged more than £217,000 to try to save three-year-old Elara Foxley, whose stage 4 neuroblastoma returned last month despite apparently successful treatment.

The money would have paid for a form of immunotherapy which is being pioneered overseas but it turned out that she was too ill for this to work.

Instead, doctors at the John Radcliffe Hospital in Oxford kept her comfortable until she passed away in her mother Nicky’s lap on Sunday morning.

Ms Foxley, who launched the fundraising campaign, will now give the money to charities which fund research and treatments for neuroblastoma, which affects only 100 or so British children every year.

She has thanked people for their support and will announce more details shortly.

Elara  was diagnosed in December 2019 and underwent multiple courses of chemotherapy and radiotherapy as well as an operation to remove a growth from her abdomen.

She was given the all-clear last summer but took a turn for the worse last month when she began struggling to walk. An MRI scan confirmed the disease was back in her brain and spine and that nothing could be done.

Elara was only expected to live for a few more days but she astonished medical staff by fighting for several more weeks and remaining cheerful and alert.

In her final moments, she and her mother sat sharing their happiest memories until she fell asleep and died peacefully.

Ms Foxley, of Knappe Close, said: “She was deteriorating as the disease took over her whole body and tests showed the growths had doubled in size so we couldn’t do any more. Elara blew everyone’s minds in the final weeks as she was still ensuring that I ate, even when I didn’t feel hungry. She’d say, ‘Go to the shop — your tummy must be so hungry’ in her usual cheeky way.

“Even when she couldn’t move her arms or legs, she was vividly remembering things we’d done together. It has always been her and me throughout this and I didn’t want her to be scared so I carried on reading her adventure stories. I’d always told her her illness was caused by ‘naughty fairies’ but I promised her she’d eventually be so much better and happier.

“At one point, she said, I don’t want to leave you’ and I promised her we’d always be together.

“I read her a story called The Invisible String, which explains how two people who love each other are always connected no matter what and after that she’d say she was sending me love through her ‘string’.

“The hospital staff were amazing — they’d become like family over the past 15 or so months, which is why I chose not to go to a hospice because it was a familiar place. It made such a difference and we’re so grateful that they were there for us. Elara was a bit more confused on Saturday because she was on a lot of medication but was still talking. I could tell what was happening by her demeanour on Sunday so I just sat her in my lap. She told me she loved me then she just slept until her breathing stopped. There was no suffering or drama —  she just slipped away as I told her I loved her too.”

Elara was transferred to a hospice the following day, where her mother sat with her for a while before returning home. She got back to find scores of cards, gifts and cheques for her appeal had been sent by well-wishers.

Ms Foxley, a former administrator for Henley investment firm Invesco, is being supported by family members.

She said: “I’d become oblivious to the response in the community as I was focused on being with Elara. It was amazing and very touching to see how many elderly people who don’t have internet access had posted contributions.

“We had thousands of messages of support, prayers and good wishes. If kindness and love could have saved us, we’d have been absolutely fine.”

Ms Foxley is now deciding which charities would benefit most from the money raised and may organise more appeals in Elara’s memory.

She said: “I feel like I have to, not because of any outside pressure, but just because I want to help other families.

“Government funding is under pressure generally and they’re never going to prioritise such a rare cancer so I feel duty bound in honour of Elara to do something as she would have wanted to help others in her position.

“We left it quite late to tell my five-year-old nephew about Elara’s condition because they were so close but we’ve told him that she’s gone to live with the angels and will be able to help other children, which made him very proud.

“It’s amazing how the thought processes of a young child can be so comforting at a time like this.”

Elara was diagnosed after a bruise below her right eye wouldn’t heal. Tests showed this was due to a low platelet count and doctors confirmed the worst when they found a mass in her abdomen. The disease had already spread to her bones.

He funeral will be held at Reading Crematorium at 1pm on Thursday, March 25. Details of remote access for well-wishers are still to be confirmed.