Pub pals still ‘meeting up’ for games of digital darts 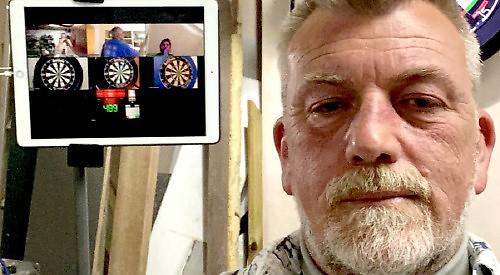 THREE friends have devised a high-tech way of keeping up their regular darts matches during the coronavirus pandemic.

Richard Pereira, Haydyn Duffy and Clive Lawrence play once a week or more over Zoom using a total of seven mobile devices, each equipped with a camera, to keep track of the action.

All are mounted on tripods, lighting stands or similar devices, with three focused on the players and three more focused on the dartboards they have set up in various places in their homes.

Mr Pereira, 53, a professional photographer, of Boston Road, Henley, then points the seventh at a computer screen on which he runs a scoring app which he updates for all three players.

He came up with the idea in April as he had enough equipment to make it work and wanted to continue the matches which the trio were regularly enjoying at the Three Horseshoes in Reading Road, Henley, as part of the town’s darts league.

He took back a board which he had loaned to the pub when it shut in the first coronavirus lockdown and set it up in his kitchen, which was being renovated so his partner Janet Wood didn’t mind.

Meanwhile, Mr Lawrence, 36, a gardener, of Wyndale Close, Henley, set one up in his garage and Mr Duffy, 53, a builder from Nuffield, who owned Mr Pereira’s home before selling it to him, set one up in a spare room.

It took several weeks for the arrangement to work as they met unexpected obstacles, including the fact that darts veered dangerously close to the cameras which were pointing at the players.

In one early game, a dart hit an iPhone and smashed the screen so it had to be replaced. The players got around this by installing a clear plastic screen in front of it while placing the cameras at a different angle where they were less likely to be struck.

Mr Pereira said: “We’d been talking about getting together as soon as possible after lockdown and that’s when I had the idea.

“It looks a bit mad with seven screens going at once but it keeps everyone immersed in the action.

“There’s always loads of chat and banter going on and it was very clunky to begin with — the first time, we were online for about three hours trying to find the right wires to connect everything up.

“There’s obviously a danger that if your aim isn’t too sharp, you could break a phone and that’s exactly what happened.

“It’s continually evolving but if there’s a better way of doing things, we’ll share our ideas and do some fine tuning.

“We were a bit less active over the summer, especially with the easing of the restrictions, but once winter came in we were doing it two days a week on Wednesdays and Sundays.

“Now our sessions can last anything from two to five hours and it can get pretty competitive but it’s all about the banter and having a bit of a laugh. My other half is an avid gardener so she’ll often be outside while I fit playing around cooking Sunday lunch.

“It has really helped us stay in touch because sometimes a regular Zoom chat can fall a bit flat, especially if you run out of things to talk about. By having an activity to bond over, things stay fun, natural and lively.

“Haydyn was quite a novice compared with us but he has improved loads, although Clive still calls him ‘the octopus’ because his darts land all over the board and his arms have to go everywhere to pull them out again.”

Mr Pereira said they would probably keep it up when life returns to normal as they can’t always meet at the pub.

He said: “Haydyn’s a bit further out from us and it’s not always easy for him to get into town, especially as he then can’t drink if he has driven himself, so it will fit in nicely around meetings in the real world.

“Although it took a while to finesse and is a bit of a Heath Robinson contraption, anyone could set this up and I wonder whether other people will be inspired to do the same thing.

“Our friends and family have all been very impressed but not that surprised. They say it’s just the kind of thing we’d get up to.”