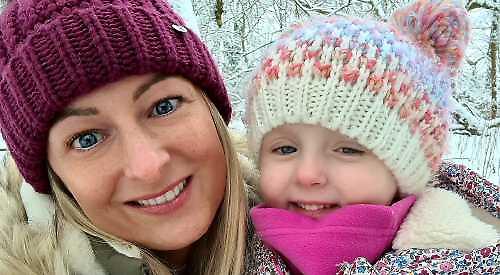 ONE hundred pink balloons were released in memory of a little girl who lost her battle with a rare form of cancer.

Elara Foxley, three, who lived with her mother Nicky in Knappe Close, Henley, died at the John Radcliffe Hospital in Oxford on March 7.

She hd been given the all-clear after undergoing treatment for stage 4 neuroblastoma last year but the disease was found to have returned in February.

Supporters pledged more than £217,000 to pay for an experimental form of immunotherapy but Elara died before this could begin so Ms Foxley will donate this to children’s cancer charities instead. A private service for family and friends was held in the chapel at Reading Crematorium on Thursday last week but dozens of well-wishers gathered outside in silence.

The service, which was led by Rev Duncan Carter, vicar of Holy Trinity Church in Henley, featured music. How Long Will I Love You? by Ellie Goulding was played at the beginning, Who I Am by Natasha Bedingfield during the committal and Planetarium by Justin Hurwitz, from the musical La La Land, at the end.

Mourners sang Amazing Grace and there was a reading from the book of Mark in which Jesus tells his disciples to allow little children to approach him. There was also a reading from the children’s story Sugarlump and the Unicorn by Julia Donaldson and another of a poem called Dreaming Time Begins, written by Ms Foxley.

The mourners filed out of the chapel carrying pink helium balloons which were arranged in bundles of five to look like flowers with petals.

They walked slowly to the nearby terrace and released them after Ms Foxley said: “We love you, Elara.”

They smiled and laughed as the balloons drifted upwards. Some onlookers also released balloons which they had brought or laid floral tributes on the ground. Ms Foxley was comforted by family members before walking round to thank people.

Elara was diagnosed in December 2019 and underwent chemotherapy, radiotherapy and immunotherapy to shrink a growth in her abdomen.

She was given the all-clear last summer but in February she suddenly had trouble walking and hospital scans showed the cancer had reached her brain and spine.

The family have thanked all who attended the funeral.

Donations in Elara’s memory to Neuroblastoma UK may be made through funeral directors A B Walker at www.abwalker.co.uk